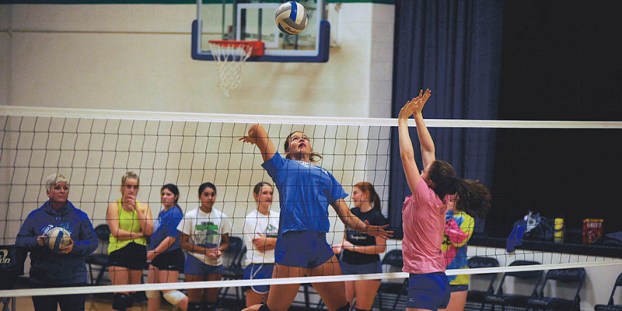 Putting in the work: LP’s Christianson hits another milestone

LYLE — Olivia Christianson has stood in the winner’s circle in the title game at the Minnesota Class Class A State Girls Basketball Tournament, and she’s also stood in plenty of empty gyms, working tirelessly on whatever sport she’s focused on at the moment.

“It was really cool, especially because I had gotten it in basketball last year,” Christianson said. “Someone asked me if I had (1,000 kills) after a game last year and obviously I hadn’t gotten it yet, so this is something I’ve been aiming at for for the last nine months.”

Christianson has spent most of her focus on basketball, where she led the Athletics in scoring, rebounding and steals last winter, but she has also stayed driven in volleyball, and she even played softball for the Athletics last spring.

Olivia Christianson puts up a jump serve for Lyle-Pacelli in practice in Lyle Wednesday. Rocky Hulne/sports@austindailyherald.com

LP volleyball Tammy Truckenmilller has seen Christianson put in time during and after practice, and she’s seen her step up as a leader on and off the court.

“I can say a ton of great things about Olivia. She’s a coach’s dream,” Truckenmiller said. “If she sees somebody struggling, she goes over and helps them with their technique. She doesn’t have to do that because she’s here at practice, working on stuff herself, but she just wants everybody to do well.”

Chistianson packs a powerful punch when she winds up for a big hit, but there is much more to her attacking scheme then brute force — especially when opponents are double-teaming her at the net.

“You have to figure out how they like to block and then go around,” Christianson said. “It’s about finding which side to hit it on, or whether there’s an open tip. If I hit it out or in the net, I have to get past it. It’s not like I’m not going to hit because I hit it in the net once.”

Christianson began her volleyball career locked into the front row, but over the last couple of years she’s learned to play in the back row as well. This season, she’s been given L-P an average 15 kills, eight blocks and 10 digs every night.

“If she sets to her mind to it, she accomplishes it. She works hard. She’s all over the court,” Truckenmiller said. “She didn’t want to come out of the game, so she learned to play back in the row.”

Christianson isn’t sure if she’ll go on to play college sports or not, so she is going to enjoy her final season with L-P as much as she possibly can. The Athletics are off to an 0-3 start, but she’s hoping things turn around soon.

“Even outside of volleyball, these girls are so much fun,” Christianson said. “We haven’t won a match yet, but hopefully our time is coming to win. We’re still enjoying it. We don’t like losing, but we try to keep each other up, connect as a team and keep each other happy.”

LYLE—If Theresa Groesbeck had stayed in bed on Monday, July 29, she would have never woken up again. Groesbeck was... read more