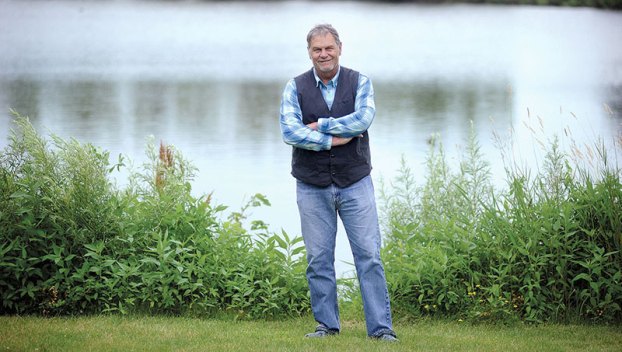 Pacelli graduated Larry Gavin will be returning to town to read some of his poetry samples during the Austin Artworks Festival at 3 p.m. on Aug. 25. Rocky Hulne/sports@austindailyherald.com

Larry Gavin learned a long time ago that poetry does not have any limitations.

Now the fly-fishing, power lifting wordsmith is ready to come back to his hometown to share what he’s learned. Gavin, who lives in Faribault and graduated from Pacelli High School in 1974 will be in Austin to read his poetry at the Austin Artworks Festival at 3 p.m. Aug. 25.

Gavin is not your typical poet, but he’s learned to write about the grace of fishing and the strain of lifting weights in a way that has seen him published in various magazines.

Gavin spends as much time outdoors as he can and he often finds himself in a much better mood when he leaves his home.

“I spend time outdoors no matter what because I think it’s good for my physical health. I walk a lot,” Gavin said. “Every day there is something different to be noticed, no matter what. I think it makes you more mentally and physically healthy.”

Gavin worked as a senior editor for Midwest Fly Fishing magazine in St. Paul for 15 years before it shut down and he also coached shot put and discus in Redwood Valley High School and Faribault. While coaching, Gavin had the opportunity to work with his own son.

Working with athletes showed Gavin how some throwers could work around their physical limitations and it also gave him inspiration with his pen.

“Writing poems is a lot like coaching,” Gavin said. “There are times when athletes can’t do what they have to do to improve, because there motor skills aren’t quite there. You have to find a way to work around that.”

The more Gavin has written, the more ideas he has come up with. He’s written poems about gun dogs, duck hunting, trout fishing and even power lifting.

“There has always been a division that’s artificial between physical activities and the rest of life, which is silly. The Greeks believed you should be good at everything,” Gavin said. “I didn’t understand it at first and I thought poetry had to be kind of different from regular life, and then I realized it could be just like regular life, except focused and more exciting.”

Gavin is excited to come back to Austin and read and he’s thrilled to share the power of poetry.

The Coalition of Greater Minnesota Cities (CGMC) recognized the City of Austin on July 25 during the Coalition’s three-day summer... read more