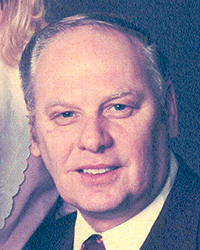 He was born Nov. 26, 1938, near Fountain, Minnesota, to Paul and Florence (Nelson) Pickett. Paul grew up in Fountain and Austin, graduating with the Class of 1957 from Austin High School. He then entered military service in the United States Navy, serving his country until his honorable discharge in 1961.

Paul returned home from his military duty and held many short-term jobs before going to work for Hormel Foods in Austin. On Dec. 11, 1971, he married Sybil VandeGrift at the Little Brown Church in the Vale. The couple lived in Austin their entire married life. Together they raised Laura Pickett, also of Austin, who works at Hy-Vee Foods in Austin.

Paul finished his career at Northern Country Coop in Oakland, Minnesota, and the surrounding area, retiring in 2010.

Through the years, Paul enjoyed taking multiple trips on his motorcycle. He enjoyed visiting and having coffee with friends. He especially enjoyed helping out many local farmers or anyone in need. On countless occasions, Paul would haul his lawn mower around and mow the grass for folks who needed help.

Survivors include his wife of 47 years, Sybil Pickett of Austin; daughters, Laura Pickett of Austin and Danita of Wisconsin; sister, Phyllis Schatz of Rochester, Minnesota; brother-in-law, Bill Humphries of Atlanta, Georgia; 11 nieces and nephews; and several great-nieces and great-nephews. Paul was preceded in death by his son, Scott; parents, Paul and Florence; brother, David; sisters, Dorothy VandeGrift and Avis Humphries; brother-in-law, Bob Schatz; and many aunts, uncles and cousins.

Funeral services will be held at 11 a.m. on Saturday, Aug. 31, 2019, at Clasen-Jordan Mortuary with Pastor Patrick Ziems officiating. Visitation will be from 5-7 p.m. on Friday, Aug. 30, 2018, at Clasen-Jordan Mortuary and will continue for one hour before the service on Saturday at the funeral home. Interment will be at Oakwood Cemetery with Austin American Legion Post 91 and Olaf B. Damm VFW Post 1216 in charge of military rites.