Patricia Ann Oehler, 86, of Austin, Minnesota, passed away on Monday, Aug. 12, 2019, surrounded by her family at her home in Clayton, North Carolina, where she spent her retirement years. 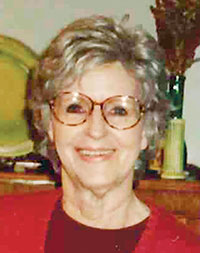 Patricia was born on July 1, 1933, in Austin to James and Helen Tate. She attended Austin High School, graduating in 1951. After high school, she married Wayne Judd in 1951. She married Ron Oehler on Aug. 30, 1957, at First United Methodist Church in Northwood, Iowa. She was employed as a bookkeeper at Hormel Foods Co. and retired after 20 years.

Patricia was a devoted wife and loving mother. She enjoyed antique shopping with her husband, gardening and bird watching.