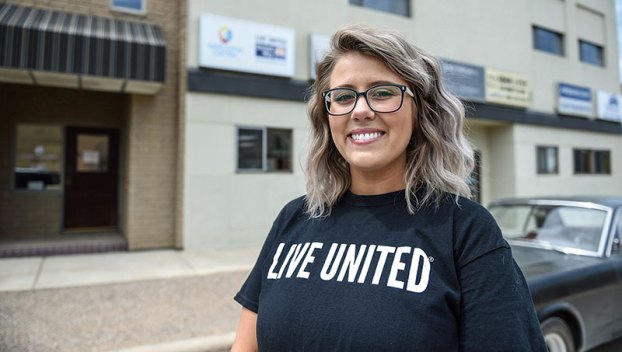 When Molly Lanke moved to Austin two years ago, she was starting a new job at the United Way of Mower County.  She never thought she would eventually end up leading the organization as its new executive director.

“I knew I wanted a leadership role,” the Iowa native said. “I just never expected it to happen at the age of 24.”

Lanke was named the new executive director of the United Way of Mower County after having served as interim director since May 6. Diane Baker stepped down from the executive director position to lead the Austin Community Recreation Center as CEO of the YMCA on May 3. Lanke’s previous position was the Marketing and Resource Development Coordinator, a capacity in which she has served for the last two years.

This shift in leadership roles was foreign to Lanke, but it was a challenge for which she was ready. Lanke officially started her new job on Monday. 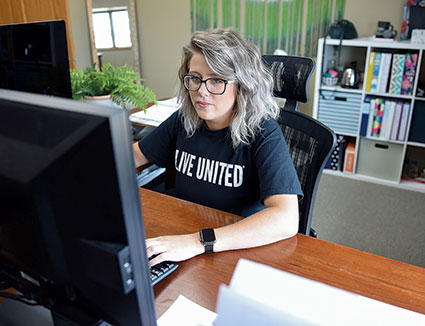 Molly Lanke works from the office as executive director at the United Way of Mower County on Main Street. Eric Johnson/photdoesk@austindailyherald.com

It was overwhelming at first. Lanke was now expected to establish and connect the United Way’s resources to 54 local programs through the 25 partnerships that the nonprofit maintains. She needs to check in on the strategic budget and pass over her past duties of marketing for campaigns and fundraisers to her fellow staff.

She also at first struggled with self-doubt and dismissed her abilities to be an executive director because of her age, which she also felt was a relatable experience for those who were similar in age.

Entering into her new role, Lanke now starts her leadership helping the United Way of Mower County with its new Get Connected system, which is collaborative with the Austin Assurance Scholarship Program. She will be leading the organization through these changes and massive projects while maintaining the daily responsibilities of connecting local partners with various events and resources to help them,

“I had no idea that I would be serving in this capacity,” Lanke said. “Diane Baker really did a great job preparing everyone and preparing me for this role. I do feel ready. There’s no reason to think that you don’t do something because you think you’re too young.”

However, leadership believed that Lanke had what it takes to become a leader and to serve the greater good in Mower County and the people who depend on the nonprofit for services to improve their quality of life. The qualities that made Lanke a leader were evident. Her age didn’t deter the board in seeing her potential.

“We are extremely excited to have Molly as our executive director,” said Tami Yokiel, United Way of Mower County Board chairwoman.”Molly has done a phenomenal job in the interim role and has shown great leadership skills and possesses high personal standards of integrity and character. She not only loves living in Austin, but also has a tremendous passion for serving people and continuing to move the United Way’s mission forward for the common good in the communities we serve in Mower County.” 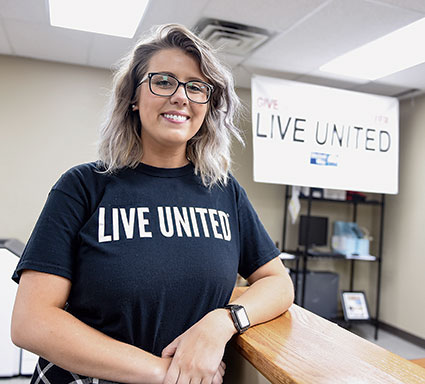 Molly Lanke has been with the United Way of Mower County since 2017 as marketing and resource development coordinator. However, now she has been named at executive director, filling the chair of Diane Baker who stepped down in May. Eric Johnson/photodesk@austindailyherald.com

It was that confidence that built Lanke’s solid foundation of support for her position. She was excited to expand the vision and mission of the United Way and to engage more with the community to raise awareness on what the United Way does for Mower County.

“I take things one day at a time,” she said. “I’m looking at improving the caring power and engaging the community more. We want to be more involved as a resource and not just fundraising. I’m really hoping to build our standing as a community connector. We really want to leverage those resources and impact everybody.”

Interestingly enough, Lanke never thought she would end up in Austin. Let alone as the head of a large nonprofit organization in Mower County. She originally obtained a bachelor’s degree in communications and political science from Iowa State University. She also earned a certificate in leadership studies and received a mini MBA for nonprofit organizations from St. Thomas University in Minneapolis back in June.

After considering a career in politics, Lanke had found herself desiring to help people through a nonprofit organization. So, that trajectory brought her to Austin to work at the United Way of Mower County. Even though the town was similar in some ways as Pella, Iowa where Lanke was from, she also saw something different and special in the community—diversity.

“I wanted to experience more than what was being offered in Iowa,” she said. “I’m from a town of 10,000 people and it was not diverse. When I went to college, I got a taste of diversity and connected me to the world. I wanted to take that step and broaden my perspectives in how I interact with different people and cultures. Austin is special, and has so much to offer. That’s why I love calling it home.”

For those who are in a similar position as Lanke, and want to serve as a leader but believe they’re not qualified enough or old enough, Lanke said to cast those doubts away and take a step back.

“Don’t do that to yourself, I did that,” she said. “Take a step back and remind yourself about why you’re doing this. Encourage yourself. Always see the good in yourself and how great you are as a person. Why would you think that? I always believed in proving yourself through action. Great things are coming our way and I could not be more thankful.”

Woman pleads not guilty to hit-and-run