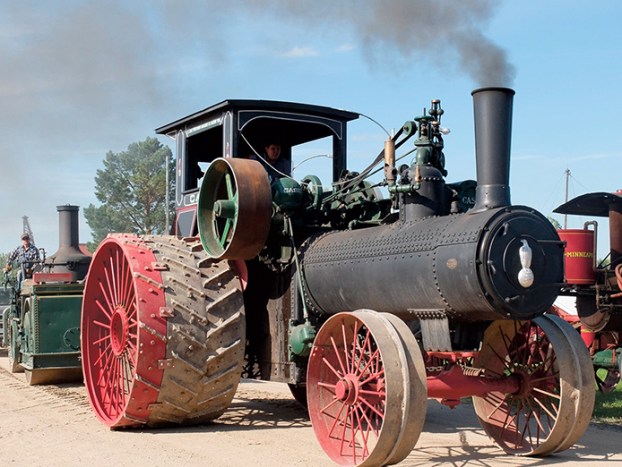 A 1913 Case steam engine pulls a piece of road maintenance equipment on the grounds of the Western Minnesota Steam Threshers Reunion in Rollag on Saturday.Dan Gunderson | MPR News

In Rollag, steam threshing is a ‘family reunion — we’re just not all related’

The smell of burning coal, steam and dust hang in the air over the grounds of the Western Minnesota Steam Threshers Reunion near Rollag.

The hamlet of 23 will swell to an expected 50,000 over the Labor Day weekend as fans of steam-powered equipment and industry of yesteryear flock to the four-day celebration of agricultural history from across the country.

The show started as a family reunion of sorts. Eric Nelson’s grandfather Norman liked harvesting with a steam engine and threshing machine, even after gasoline-powered combines had mostly displaced them.

So in 1946, he invited family members to join him on his farm for what he called a “threshing reunion.”

“It was just a gathering of Nelsons and family members,” said Eric Nelson, 58. “They hauled water from the church in Rollag and made coffee and cookies and doughnuts.”

That family gathering kept growing, and by 1954 it had become a public event, complete with vintage farm equipment demonstrations, food and hands-on activities.

Over the years, people brought their old farming equipment to the Nelson farm — and soon, one of the family’s fields became a permanent show site that now resembles a small village.

There’s a school, a church, a general store, a blacksmith shop, a printing shop and dozens of buildings that store and protect machinery.

Hartley Ellingson, 85, was at that first show in 1954. And he hasn’t missed one since: This year will be his 65th as a volunteer. He said he first visited with his dad, out of curiosity, but he was soon hooked by what he calls the barn-raising sense of community.

“We’re all volunteers. The fact is, we each buy a ticket to get in here, and nobody gets any special credit for anything,” said Ellingson.

“Everybody just pitches in and does, and somebody comes up with an idea and another person says, ‘Yeah, that looks good.’”

Eric Nelson wasn’t there for the first show — he was born in 1963 — but some of his earliest memories are of daily visits to the show site with his grandfather.

“He’d come down [to our farm] to pick my brother and I up, and we would come up and drive through the grounds every night in the summer, and then we’d go lock the gates,” he said.

And while the threshers group has grown from a family-run reunion to a volunteer-run agricultural history organization, the Nelson family still runs the farming demonstration part of the show. And they’re still in charge of harvest. They grow wheat on a nearby field in the spring, so it’s ready to feed the turn-of-the century threshing machines during the weekend gathering.

The focus is on agriculture, but there are also massive steam engines salvaged from industrial sites and restored to working order.

Hartley Ellingson still owns the steam engine his dad brought with them to the show in 1954. He helped run a steam locomotive at the event for 20 years, and now he operates the site’s steam-powered sawmill.

His grandson Sanders Ellingson, 23, is continuing the family tradition.

Sanders, who works as an engineer in Fargo, N.D., marvels at the ingenuity of the people who designed and built the first steam-powered engines and tractors.

But that’s not the main attraction for him.

“It’s just the enjoyment of coming out and getting to spend quality time with my grandpa,” he said.

‘Like a big family reunion’ where not everyone’s related

The steam threshers reunion runs on volunteers like the Ellingsons. More than 2,000 people donate at least eight hours a year to the effort. Many of them put in weeks of work getting ready for the show: erecting new buildings, restoring old equipment and maintaining the infrastructure to support tens of thousands of visitors every year.

A lot of those attendees are regulars, Nelson said. He looks forward to reconnecting with people he only sees at the show once a year. He still thinks of it as a family reunion.

“The key word of Western Minnesota Steam Threshers is the reunion,” he said. “It’s just like a big family reunion — just that we’re not all related.”

Nelson said the show has purposely tried to attract young people, and seems to be having success: During preparations last weekend, Nelson was loading grain onto a trailer for threshing, “and after one load I was told to go drive a tractor. There were enough young people to do the work,” he said.

In another effort to prepare the next generation, the organization offers classes, to train for the state license required to operate a steam-powered engine.

And tractors from the 1960s and 70s are now allowed to be part of the show as a way to encourage younger collectors.

And they’re trying to connect to even the youngest reunion visitors with the kids’ tractor-driving activity.

The annual Western Minnesota Steam Threshers Reunion will be held over Labor Day weekend on the nonprofit’s grounds in Clay County.