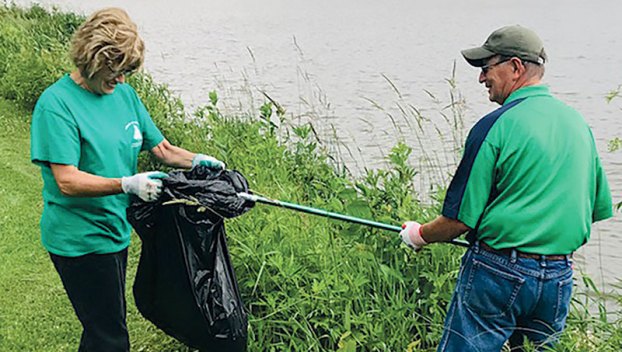 Volunteers with the Spruce Up Austin organization use litter grabbers June 24 to do shoreline cleanup along Austin’s East Side Lake. Photo provided

Volunteers now have a great resource in Austin for removing trash and debris from local streams, parks and roadways to help beautify the community thanks to a local foundation’s grant.

Cedar River Watershed District (CRWD), Jay C. Hormel Nature Center and the Austin Public Library now have 20 litter grabbers, each with a four-foot reach, for volunteers to use for a variety of community cleanup projects.

Overall, $400 of litter grabbers were purchased with part of a $1,500 grant awarded by the Austin Area Foundation (AAF) to the CRWD for the We Are Water MN statewide traveling exhibit, which was in Austin from April 27-June 16.

People now can use a library card to check out up to five litter grabbers from Austin Public Library to do a cleanup, whether it’s for a walk around Austin Mill Pond, downtown Austin or their neighborhood. CRWD and the nature center each will have the remaining litter grabbers for people or groups to borrow from them for cleanup projects.

“Many people enjoy keeping our community clean and looking nice, and these litter grabbers are aimed at helping more of those efforts happen more often,” said Tim Ruzek, CRWD outreach coordinator. “For water, these grabbers will help with river and shoreline cleanups along with other litter pickups that will keep trash from being washed into our streams.”

Several groups already have put the litter grabbers to use this summer, starting with the nature center’s river cleanup as part of its annual Water Festival. Volunteers used the grabbers to clean the Cedar River State Water Trail from its Dobbins Creek confluence to the South Main Street bridge. Spruce Up Austin also used the equipment for its annual cleanup June 24 along East Side Lake in Austin.

This past weekend, Riverland Community College’s ag club and R-STEP Academy students used the litter grabbers to clean shorelines around Austin Mill Pond (part of the Cedar River). Another volunteer group used the equipment Sunday to remove litter from the Cedar River between Mower County Road 4 and the Iowa border.

City to spray for mosquitos

The City of Austin will be spraying for mosquitos on Sunday or soon thereafter, weather permitting. This will be a... read more