Breaking through: Packer girls tennis gets first win since 2017

The spotlight was on Austin’s No. 2 doubles team of Rachel Christenson and Kali Meiergerd, who are both team captains, Thurdsay afternoon at Paulson Courts. And they were able to answer the call in their longest and most intense match of their careers to give the Packers a 4-3 win over Faribault in Paulson Tennis Courts Thursday.

Meiergerd did not realize that she was playing for the team win until it was announced that the third set would be played as a full set and not just a 10-point tiebreaker. Meiergerd and Christenson were able to perform under pressure as they beat Faribault’s Rylie Starkson and Kate Jasiniski by scores of 7-5, 6-7, 7-5. 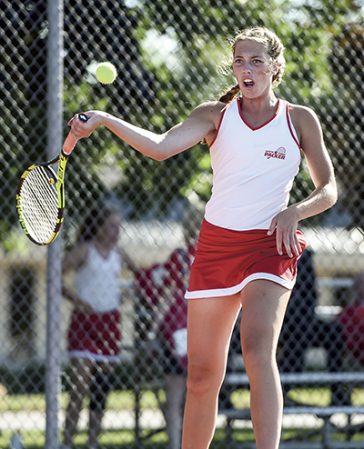 Ausitn’s No. 1 Reana Schmitt lays into a forehand in her match Thursday against Faribault at Paulson Courts. Eric Johnson/photodesk@austindailyherald.com

“At first, we didn’t realize at first that if we won, it would be a team win. Once we found that out, it was pretty exciting,” Meiergerd said. “My smile is not going away anytime soon. It was hard to keep up, but everybody just kept saying ‘make it fun and it will get better.’”

The final match went for two and a half hours, but Christenson wasn’t feeling winded when it was over.

She was feeling elated. 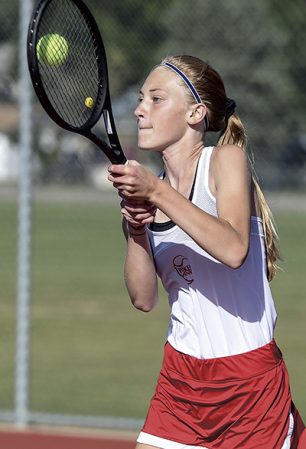 Austin’s Gracie Schmitt with the forehand at No. 3 singles against Faribault Thursday afternoon at Paulson Courts. Eric Johnson/photodesk@austindailyherald.com

“I’ve never played that long of a match,” Christenson said. “We were lifting each other up and it really helped to have everybody out at half court cheering for us whenever we had a good shot. Once we get into the first couple of games of the third set, it was like ‘we’ve really got to do this, now let’s go.’”

Gracie Schmitt and Lauren Wernimont each picked up two-set singles wins for Austin and the No. 3 doubles team of Maisy Bothun and Tori Watkins won in two sets.

After the match was over, the Packers mobbed Meiergerd and Christenson and the team went into full celebration mode.

“I have been so proud of how the girls have been working in practice and I have been telling them that we have been close to getting over the hump and getting a win. Tonight we finally got over that obstacle,” Austin head coach Jeff Anderson said. “It was great to see their excitement after the match.  I am hoping we can continue to build on this and continue to get better.”

The last time the Austin girls tennis team won more than two matches in a season was in the fall of 2013 when the Packers went 3-7 overall. 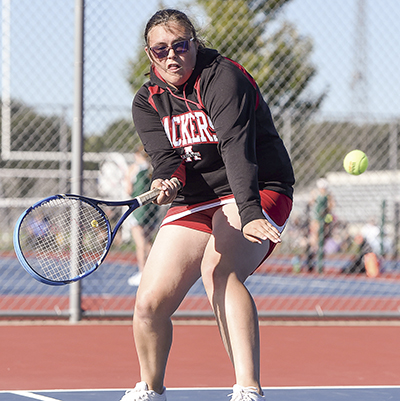 Austin’s Jadyn Moriarty with the return during the No. 1 doubles match against Faribault at Paulson Courts. Eric Johnson/photodesk@austindailyherald.com 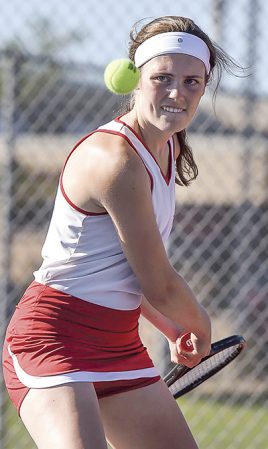 Austin’s Chloe Schmitt eyes the ball in during her No. 2 singles match against Faribault Thursday afternoon at Paulson Courts. Eric Johnson/photodesk@austindailyherald.com