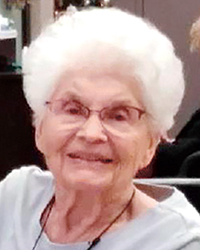 Beverly was born on May 4, 1928, at the Lockwood Family Farm in Grand Meadow, Minnesota. Her parents were Elmer and Claire Norby, who soon moved to Austin, Minnesota. She had one younger brother, Bruce. She attended school in Austin from kindergarten until her graduation from Austin High School in 1946. She loved visiting the farm in Grand Meadow and going on fishing trips “up North” with her family and friends. Bev attended the University of Minnesota dental assistant program. She enjoyed living in Austin and returned to work for the Post Office and for a dentist. During that time, she was Miss Austin and then became a candidate for the Aquatennial Queen of the Lakes Competition. She met her husband-to-be, Wayne Thede of Albert Lea, Minnesota, and they were married on April 18, 1953.

Shortly after their wedding, Wayne went into the U.S. Army during the Korean War. He was deployed to Naples, Italy, and later received permission for Bev to join him. They spent their first year of marriage in Italy, traveling whenever they could. When they returned home, Wayne accepted a position with Standard Oil Company, which took them all over southern Minnesota: Mankato, Minneapolis, Hutchinson, Willmar and Pipestone. In Pipestone, they had two daughters, Kathy and Karen (1958, 1959). After moving to Minneapolis, their son, Scott, was born (1964). In 1965, they moved to Rochester, Minnesota, and soon decided to begin a new endeavor: a small franchise with Bridgeman’s Ice Cream. Bev was always a big support to Wayne and did the accounting and payroll, starting on a small desk in the bedroom and soon moving to the kitchen table. As their business developed, Bev’s job grew into managing the entire employee payroll. In the early 1970s, Wayne and Bev established Green Meadows Arabians in Rochester. Bev again did the accounting, the farm payroll, breeding records, show records, and was the farm’s number one supporter. When they eventually sold their ice cream business, Bev needed a new career. She was encouraged to go into real estate, so she took the classes and went to work with Hexum Realty and later Edina (then K &K) Realty. She enjoyed her work and loved helping people find new homes. In 2007, she retired for a day and then became an assistant to another realtor.

Bev and Wayne were members of the Meadow Park Church of Christ (now known as Hope Summit). Bev was a Sunday school teacher, a member of Women’s Circle and head of the Wedding Committee for some time. She also sang in a trio and prepared communion. The couple eventually became members of Autumn Ridge Church. Bev was dedicated to the church and was especially encouraged by the worship services and the Women’s Bible Study.

Bev loved her family and was a wonderful Mom. She had many talents. She was a good cook, she could arrange flowers, decorate cakes, made ceramics, knitted, sewed and, most of all, she loved to quilt! She was a member of the Rochester Quilter’s Sew-ciety for as long as she could attend.

Bev is survived by two daughters, Kathy Robinson (Victor) and Karen Thede; a grandson, Thane Robinson; brother, Bruce (Margaret) Norby; and eight nieces and nephews. She was preceded in death by her parents; her husband; and her precious son, Scott.

A memorial service will be held at 11 a.m. on Friday, Aug.2, 2019, at Autumn Ridge Church in the Timothy Chapel in Rochester. Visitation was held from 5-7 p.m. on Thursday, Aug. 1, 2019, at the River Park Chapel, Macken Funeral Home. Memorials may be made to the Autumn Ridge Women’s Bible study. Macken Funeral Home is in charge of the arrangements. Online condolences are welcome at www.mackenfuneralhome.com.