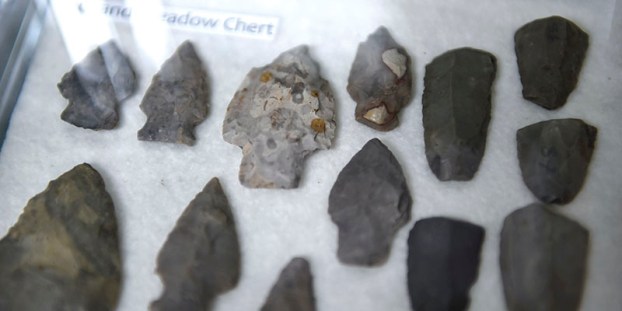 A variety of chert arrowheads are on display in the new exhibit. Photos by Eric Johnson/photodesk@austindailyherald.com

“We acquired the collection from Maynard Green’s daughters, Judy and Joanne,” she said. “Maynard passed away in 2010 and they held onto it for several years. They did not want to break it up in any way. We did some fundraising and were able to bring it to the MCHS in January.” 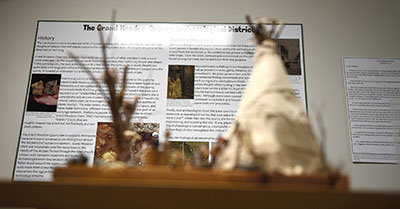 Green collected arrowheads, a hobby that began when he worked on his grandparents’ farm and plowing the field turned up new finds, Timm said.

In the late 40s, Green discovered the Chert Quarry area in Grand Meadow. He notified the Minnesota Office of the State Archaeologist, but they did not come to the quarry until the 80s.

“From the late 40s until 1980, (Green) would go in the quarry area and find all of the things you see in the collection,” Timm said. “Everything in his collection was found within a 30-40 mile radius of Grand Meadow and the quarry.”

Displayed in the new exhibit are numerous examples of early arrowheads, projectiles, points and drills. Almost all of them come from Green’s collection.”

“There are probably about 10 or 12 pieces that are not from (Green’s) collection, but those are noted on their object labels,” Timm said. “I’d say about 98 percent of what is on display is from his collection.

The entire Green collection consists of 843 different pieces, though not all are on display. The oldest estimates on some of the pieces are as old as 9,000 years.

“The State Archaeologist Office said once you get that far back, it’s pretty rare to find,” Timm said. 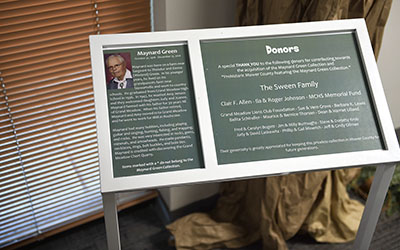 A display tells the story of Maynard Green.

“That I think is one of the biggest misconceptions,” Timm said. “When people hear the term ‘arrowheads,’ they tend to think Dakota or Ojibwe. Those are considered historic tribes while these are all prehistoric. These are not the Minnesota tribes we think of today.”

The exhibit also contains some items visitors may not be familiar with.

“I think some of the more interesting pieces are those that started out as one tool and was repurposed into another,” Timm said, pointing out a display of repurposed tools. “They were really efficient; they wanted to get every use out of it that they could.”

A private, invitation-only grand opening reception will be held from 6-7:30 p.m. on Monday. The exhibit will officially be open to the public on Tuesday.

The Mower County Free Fair is kicking off on Tuesday, Aug. 6 and will run through Sunday, Aug. 11. Fair... read more