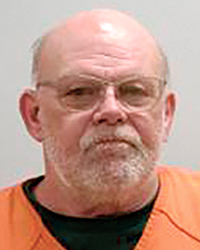 Court documents state that Austin Police and Fire were dispatched at 3:13 p.m. on Aug. 14 to a fire at an apartment at 1201 Third Avenue Northwest. The reporting parties indicated they were trapped and that the landlord had started the fire.

First responders observed people yelling from the upstairs apartment and saw flames below the door to the apartment and on the deck. Firefighters were able to breach the door and rescue the tenant, an adult male. A visitor, an adult female, cut her way through a window screen and had to be rescued via ladder, according to Austin Fire Chief Jim McCoy.

The man indicated the fire had been started by the landlord, Slavan, whom he said was mad at him and had been harassing him and his friends. He said the harassment had been worse since reporting Slavan, who lives in the main floor, during a domestic situation several weeks before the fire.

The man said before the fire, Slavan had been pounding on the door loudly demanding to be let in. After refusing to let Slavan in, the man said he saw drops dripping down on the floor by the door and fluid in the gap between the door and the floor.

Within a few seconds he saw flames, which began to burn up the carpet, causing them to have to back away from the only exit. He also told police that Slavan had threatened to burn the house down around him a week prior. 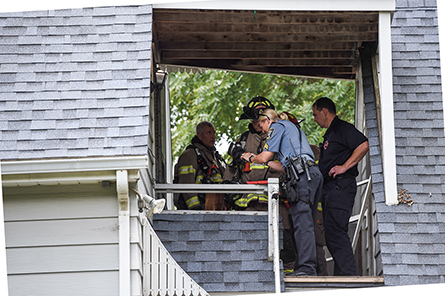 Authorities investigate the scene of the fire in question earlier this month. Herald file photo

Detectives found a gas can tilted on its side in the breezeway between the downstairs apartment and the garage. While photographing the doorframe from the breezeway to Slavan’s apartment, a detective located a lighter with a blue handle on the ledge just inside the doorway.

Slavan was later arrested in the 1100 block of Second Avenue Northwest, telling police he had been drinking all day. He stated he got home that afternoon and observed two people leaving his property, then went into his house and laid down for a minute before going to his friend’s house, where he was arrested. He denied knocking on the tenant’s door.

McCoy said a representative of the State Fire Marshal’s office collected samples to be tested at the Bureau of Criminal Apprehension lab.

A review of Slavan’s criminal history shows prior convictions for domestic assault and knowingly violating predatory offender registration requirements. He is currently awaiting disposition on 2018 charges of felony second-degree criminal sexual conduct-victim under 13 and felony predatory offender fail to register.

A pretrial has been scheduled for Jan. 24.

In Rollag, steam threshing is a ‘family reunion — we’re just not all related’

By Dan Gunderson MPR News/90.1 FM The smell of burning coal, steam and dust hang in the air over the... read more