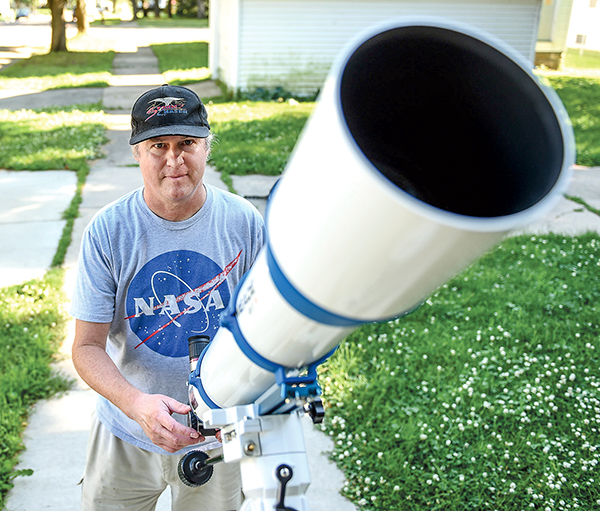 Joe Frisk will be hosting a sky viewing part Friday night at the Mower County Fairgrounds, just before the 50th anniversary of the Apollo 11 moon landing. Photos by Eric Johnson/photodesk@austindailyherald.com

On Saturday, it will have been 50 years since the United States landed human beings on the moon’s surface.

Apollo 11 was a milestone of human achievement and the result of a country’s effort to reach out into the cosmos.

As Americans prepare to celebrate this anniversary, one Austin man is hoping to boost the interest in space in his Austin neighbors.

From 10 p.m. to midnight, tonight, at the Mower County Fairgrounds, Joe Frisk will be hosting a viewing party of the moon and two of our solar system neighbors: Jupiter and Saturn.

“I’m hoping, not expecting, for a big turnout,” Frisk said, standing next to his own telescope which was set up on the sidewalk in front of his house. “I would like to see some people who have a scope to come out and if they don’t have their own, come out anyway and look through mine.”

Overhead, in the command module still in lunar orbit was Michael Collins, the other member of the three-man crew.

Panorama view of Apollo 11 Lunar surface photos taken by Astronaut Neil Armstrong at Tranquility Base of a crater Armstrong noted during the Lunar Module descent. The panoramas were built by combining Apollo 11 images starting with frame AS11-40-5954 through end frame AS11-40-5961. The panoramic images received minimal retouching by NASA imagery specialists, including the removal of lens flares that were problematic in stitching together the individual frames and blacking out the sky to the lunar horizon. These adjustments were made based on observations of the Moon walkers who reported that there are no stars visible in the sky due to the bright lunar surface reflection of the Sun. Photo courtesy of NASA

“I was still eight years old,” Frisk said. “I remember it being very exciting watching them step down. I was up late that night. It was exciting that we were stepping onto another world for the first time.”

While Frisk joined millions around the globe watching Eagle set down, he wasn’t necessarily into all things space. His family had a telescope, but it was broken by the time he got to start using it.

It wasn’t until fairly recently, with the work being done on the James Webb Space Telescope, that Frisk really began getting interested in space and astronomy.

After several delays, the James Webb, slated to replace the aging Hubble Telescope, is scheduled for launch in 2021.

“This is going to open up the universe,” Frisk said. “That got me started.” 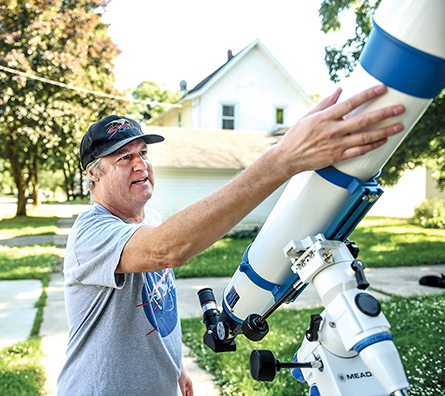 Joe Frisk talks about his telescope and the upcoming viewing part he’s hosting tonight at the Mower County Fairgrounds. Photo by Eric Johnson/photodesk@austindailyherald.com

From there, Frisk made every attempt to get outside to view the night sky, even braving the frigid temperatures of this year’s winter. He challenged himself over a year’s time and said he had viewings on 208 nights during that time.

That lead to hosting viewing parties at Todd Park in the far northeast corner.

“We got people with scopes that they haven’t taken out in years,” Frisk said.

While admitting the fairgrounds isn’t the best place for wide sky viewing, for things like the moon and planets, absence of light isn’t as important.

“I want people to come out and see Saturn’s rings and Jupiter’s moons,” he said.

Those coming out may also have to contend with less than perfect weather conditions. The National Weather Service is predicting partly cloudy skies with a 40 percent chance of showers and thunderstorms.

People are encouraged to enter the fairgrounds at the main gate of 12th Street SW and head down the midway to the parking lot on the left.

If weather prevents a viewing, then Frisk said they will try for 10 p.m. on Saturday. For more information email jgfrisk@hotmail.com.