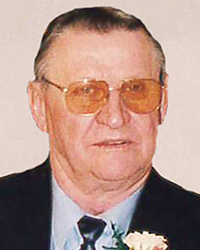 Verlin Eaker, 86, of Mechanicsville, Iowa, passed away Sunday, July 14, 2019, at his home, nearly nine months after the passing of his beloved wife, Sharon.

Verlin Lyle Eaker was born June 3, 1933, in Blooming Prairie, Minnesota, to Amos and Mabel (Dahl) Eaker. He grew up on the farm and graduated from high school. He later married Sharon Kime on March 13, 1955. They resided in Austin, Minnesota, and Blooming Prairie until moving to Cedar Rapids, Iowa, in 1966. They later moved to Mechanicsville in 1977. Verlin worked in insulation and siding and belonged to the International Association of Heat and Frost Insulators and Allied Workers Local 81. He most recently worked as a supervisor in the Cedar Rapids Recycling department until his retirement. Verlin enjoyed euchre and Canadian fishing trips with Sharon, family, and friends, Ernie and Joyce Ludvicek.

A funeral service will be held at 10 a.m. on Friday, July 19, 2019, at Stewart Baxter Funeral & Memorial Services in Mount Vernon, Iowa, with Pastor Josh Swaim officiating. Visitation will be from 4-7 p.m. on Thursday, July 18, 2019, at the funeral home. Please share your support and memories with Verlin’s family on his tribute wall at www.stewartbaxter.com under obituaries.

Donald LeVoy Johnson, 89, was welcomed into Heaven on July 13, 2019, at Mayo Clinic Health System-Austin surrounded by his... read more