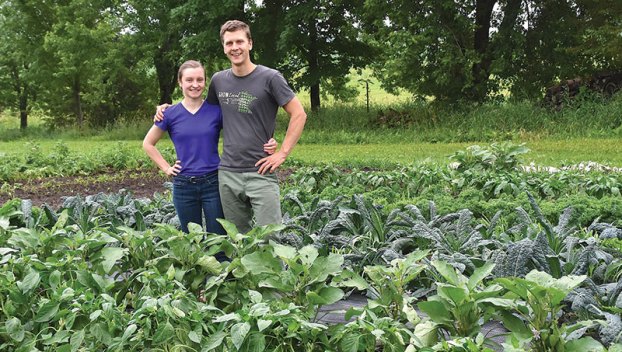 Scott Roser and his wife, Lyubov Slashcheva, have established a small, organic vegetable farm near Rose Creek. The bounty can be found at farmers markets, or through the Community Supported Agriculture program — which provides boxed produce once a week to those who have shares in the program. Deb Nicklay/newsroom@austindailyherald.com

Scott Roser recalled that over the years he was sometimes asked about his favorite hobbies.

“I could never think of anything good,” he said with a grin.

But thanks to helpful instructions from an elderly neighbor when he lived in Strawberry Point, Iowa, he began to learn and expand on an early interest in gardening.

“And I found I really enjoyed it,” he said.

That hobby, you could say, has blossomed into the establishment of Ole and Lena’s Veggies, a small organic vegetable operation that provides healthy, seasonal produce for his community. His four gardens are located on less than half an acre on his parents’ home acreage near Rose Creek.

Ole and Lena’s Veggies is in the midst of its first growing season and results to date are good, Scott said. In addition to selling at farmers markets in Austin, LeRoy and Rose Creek, Scott and his wife, Lyubov Slashcheva, operate a small Community Supported Agriculture program, offering up boxes of produce to those who purchase a share (which covers 20 weeks of fresh produce) or half-shares (that covers 10 weeks). To date, 18 have signed up to receive the boxes that often include recipes – some using lesser known vegetables, like kale and turnips — provided by the couple.

“We like to push people to try new things,” Scott said. 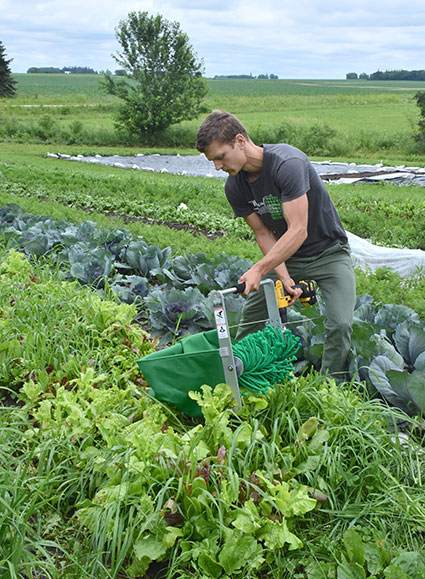 Scott Roser uses a greens harvester in one of the four gardens at his operation near Rose Creek. The gardens are located on his parents’ acreage. Deb Nicklay/newsroom@austindailyherald.com

There are plenty of the more popular vegetables, to be sure. Scott and Lyubov have planted 24 types of vegetables in the certified-organic gardens, from beets and cucumbers, to sweet corn and tomatoes. Scott studied garden marketing before jumping in and found it was a good move ahead of the first season.

The business keeps the already-busy couple even busier. Lyubov is a dentist who practices in Rochester and helps out after hours; Scott’s parents, Cathy and Chris, as well as friends, also jump in to help. Scott estimates he works 55 hours a week on the gardens while also serving  as an interim  pastor.

The adventure is more than just a business, however; Scott has found that working in the soil with only natural methods brings great satisfaction. Coming to the land also brings him full circle: He recalled the special time he spent as a child on his grandfather’s farm near Lyle – the business name, “Ole and Lena” are not from the long-running jokes of the same name, but the real names of his Helle great-grandparents who were pioneer farmers.

Ole and Lena’s Veggies can be found at farmers markets in Austin on Mondays, Rose Creek on Tuesdays and LeRoy on Thursdays; call Scott at 507-438-5445 for more information on the Community Supported Agriculture shares, or via email at: olelenaveggies@gmail.com

Immigrants to Austin will be greeted by a new face at the Welcome Center. Herve Idjidina is the new executive... read more