Anyone that even knows me a little bit should probably understand that my technical skills are, shall we say, limited.

In your face algebra.

Really, I’m not sure what it says that turning things off and turning them on again actually works more than it should these days.

In the grand scheme of things, my ability to fix anything, even those things outside of the technical, is vastly limited.

I’ll try my hand at some things with say, the house. I installed a new smoke detector like a  champ the other day for instance. Fire Chief Jim McCoy would have been proud.

However, I have limited myself to two rules. I don’t touch anything electrical or plumbing related. The possibility of electrocuting myself or flooding the house are just too high. I’m actually capable of quite a bit when I put my mind to it.

So with all those things in mind, I’ve started looking into the idea of building a gaming PC.

Sorry, but I can’t help it if you haven’t figured out by now that I’m a card-carrying member of the Modern Nerd.

Now for clarity, I’m not the kind of person that can occupy several hours of my day playing video games, nor do I have a YouTube channel where people can watch me bungle my way through a level. Nobody has time to watch me do that.

I play when I can and stop when I get tired, which is often. I can’t play for hours on end because I just feel restless after awhile and utlimately get forced into adulting, which we all know is rarely any fun.

So with all of those things and explanations out of the way, I can say with confidence that I play enough to consider constructing my own PC. 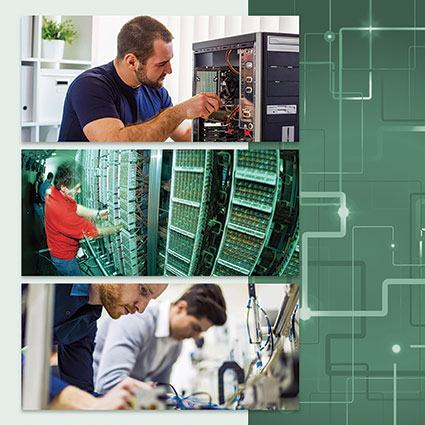 Just look at these talented people working on computers. Betcha they aren’t burning a house down. Metro image

The challenges of this are many, including above all things that which I have mentioned, is me building a computer.

I have no technical ability at anything. I can fix little things and sometimes bigger things if I have a trained mind guiding me, and even then it can be more than a struggle.

Those in our company’s IT department are saints for some of the things they’ve had to work with me on. Their patience is off the charts and I highly commend them.

I do question myself during those times, after I complete something with their help. What really qualifies me to put together my own PC? Nothing, but I do know more than a few enablers, however, and that’s dangerous.

I have a couple friends much more knowledgeable about PC’s than I am who have assured me it’s not as hard as it appears.

And there is an entire community of gamers on Facebook that I’m a part of who have also told me the same thing.

Watch some videos on YouTube, do your research and you’ll be fine. That’s pretty common advice.

Where does this faith come from? The gamer community, I understand. They don’t really know me outside of the community or really as a person. They don’t understand the petrifying fear I have of seeing two wires while immediately treating the situation like a bomb in a movie.

My friends on the other hand should know better, and yet they still say that I should be able to handle it.

I feel it’s a bit sketchy to allow me anywhere near computer parts and expecting I can put them in a container in such a way that they work.

That’s asking an awful lot and none should know that better than my readers. You’ve read enough of these columns to know that these kinds of things can go south in a hurry.

Still, I guess I’ll continue looking at this situation and see what happens.

It’s not like I can burn the house down or anything … or can I?