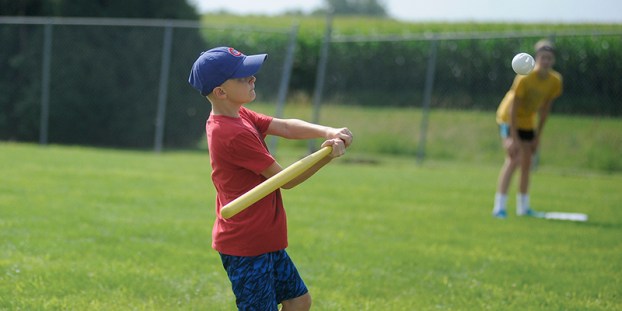 Logan Swygman lines up a swing at a wiffle ball camp in Hayfield Thursday. Rocky Hulne/sports@austindailyherald.com

The kids love it: Wiffle ball taking summers in Hayfield by storm

HAYFIELD — When Kasey Krekling and his friends started playing wiffle ball on a daily basis the summer after his ninth grade year in Hayfield, they probably didn’t realize they were starting a trend that would last for the next 15 years.

That summer culminated in the first ever annual wiffle ball tournament in Hayfield and the game is now spreading to Hayfield’s youth. Krekling, who is the head girls basketball and baseball coach for the Vikings, used this past week to host a summer wiffle ball camp. It is the fifth straight year that camp was held.

“We think it’s a fast paced game that a lot of kids love to play and it’s become really popular in Hayfield. It helps with hand-eye coordination and it’s similar to baseball and softball,” Krekling said. “We teach the game in a fun way and it gives them something to play in their back yard.” 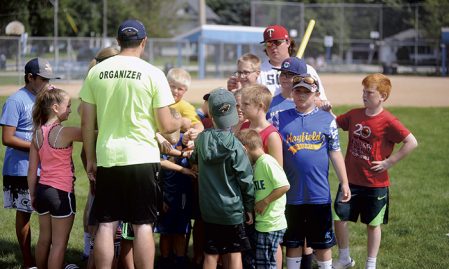 Hayfield head baseball coach Kasey Krekling speaks to the particpants of a wiffle ball camp at the Hayfield softball field Thursday. Krekling began playing whiffle ball in Hayfield when he was a freshman in high school and he has kept the sport going in town. Rocky Hulne/sports@austindailyherald.com

The camp includes batting practice, throwing practice and games, which brings out the competitive side of Hayfield’s youngsters. Kenna Rutledge, who will be a fifth grader at Hayfield this fall, helped her team win a game with an inside-the-park homer on the last day of camp.

Kenna, who is the younger sister of former Hayfield standouts Carrie Rutledge and Cam Rutledge, said that she loves getting out and competing.

“It’s fun to play the games, it’s fun to win and beat people. We all like playing wiffle ball here and it’s good to get together,” Kenna said. “It definitely helps me. I just love playing sports. Sometimes we get tired, then we just suck it up and keep on playing.” 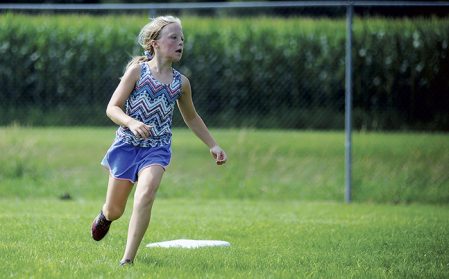 Kenna Rutledge rounds second base during a wiffleball camp being held at the softball field in Hayfield Thursday. Rocky Hulne/sports@austindailyherald.com

Ben Nelson, who will be a sixth grader in the fall, has been drawn to baseball for his whole life and wiffle ball helps give him an inside track on his swing. Ben is the younger brother of Brady Nelson, who was a standout pitcher on Hayfield’s state qualifying baseball team this past spring, and Zach, a former Hayfield baseball player, who was helping Krekling run the wiffle ball camp.

Ben respects his older brothers, but he had a lot of fun competing against Zach this week.

“It’s pretty cool playing with my older brother out here and then crushing him in every single game,” Ben said. “I try to learn here and take it out to the baseball field when I play.” 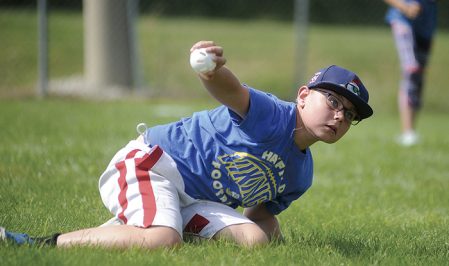 Ben Nelson holds up the ball after making a catch in Hayfield Thursday. Rocky Hulne/sports@austindailyherald.com

The Hayfield annual wiffle ball tournament will be held in August. It usually draws around 20 teams and one year it brought 33 teams to town.

Krekling said some of the faces on the field have changed, but the passion for wiffle ball is still running strong in Hayfield.

“Some people have moved away, but I’m still here and I keep running it because I know the kids enjoy it,” Krekling said. 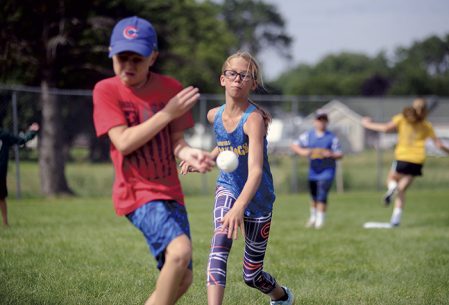 The Austin Bruins have announced the hiring of Kenny Orlando as the team’s new assistant coach. Orlando, 26, arrives in... read more