Shirley M. Adams, 91, passed away peacefully on Saturday, June 29, 2019, at the Cedars of Austin, where she resided for the last three years. 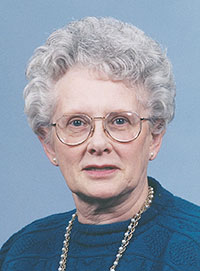 Shirley was born to F. Emmet and Edna (Crilly) Thomas on March 30, 1928, in Austin, Minnesota. A lifelong resident of Austin, she attended Columbus grade school and St. Augustine High School, graduating in 1946. She worked for F.I. Crane Lumber Co. for a few years before she married LaVerne P. Adams on Dec. 27, 1948, at St. Augustine Church. They went on to raise a family in Austin until LaVerne’s untimely death in 1970.

Shirley was a member of Queen of Angels Catholic Church. She enjoyed gardening, camping and road trips with her children and, later, bus tours and trips to Europe with cousins and friends. Most of all she loved spending time with her family.

A funeral Mass will be celebrated at 11 a.m. on Wednesday, July 3, 2019, at Queen of Angels Catholic Church with Father Dale Tupper officiating. There will be a 5 p.m. CCW rosary on Tuesday, July 2, 2019, at Mayer Funeral Home, where friends may call from 5-7 p.m. The family will also greet friends at a dinner following the service at the church on Wednesday. Interment will be in Calvary Cemetery. Arrangements are by Mayer Funeral Home. Condolences may be left online at www.mayerfh.com.

Aniceta (Ceta) Lillian Overocker, 93, of Austin, Minnesota, passed away on Saturday, June 29, 2019, at her home surrounded by... read more