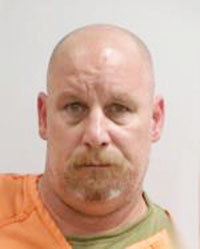 According to the court complaint, law enforcement from the Mower County Sheriff’s Office were called at 3:33 p.m. on July 11 to a business in Dexter after a woman there reported Podolske had violated a restraining order issued against him in Colorado. She informed dispatch that he was calling her and repeatedly sending text messages and had damaged a vehicle she was in the process of buying at her residence.

A deputy then spoke to the woman on the phone and was told that Podolske was stalking her and had threatened to kill her. While speaking on the phone, the woman reported seeing Podolske drive by the business in a pickup truck with a camper topper. She sounded distraught and said she believed he was going to her residence to steal her dog.

Law enforcement went to the area, but did not find Podolske. They spoke to the woman and learned that she had a restraining order against him from the El Paso District County Court in Colorado that prohibited him from contacting her. Dispatch confirmed the restraining order, though a later review indicated that some parts of it had expired.

While speaking to law enforcement, the woman received a call from Podolske, who said he had been in the area and left. The woman said she believed he was staying at the Rochester home of a relative.

The deputy photographed images of text messages Podolske sent and noted they were very abusive toward the woman.

She also reported that Podolske had gone to her Dexter residence and damaged a 2003 Ford Taurus she was in the process of buying. Law enforcement went to the residence and observed the Ford and were told by a neighbor the incident occurred at about 6 p.m. on July 9. The neighbor said Podolske rammed the vehicle several times with the rear of his pick up truck, which had a trailer hitch. Damage to the vehicle was consistent with that of a trailer hitch.

A deputy spoke to the owner of the vehicle, a Rochester man, who said he received threatening messages from Podolske, who described how he damaged the Ford.

On July 15, Podolske called a deputy to report that the woman was harassing him. When the deputy asked about the incidents the woman had reported, Podolske said he was in the Dexter area at about 1:30 p.m. on July 9, but denied damaging the Ford.

A review of Podolske’s criminal record shows prior convictions for theft, violating a domestic abuse no contact order and escape from custody.

Podolske will appear in court again on Aug. 1.

After 98 years on this earth, Margaret Blake has journeyed to her final home. Her life’s work done, Margaret died... read more