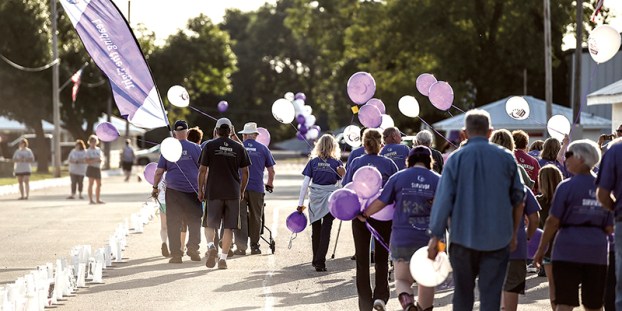 Survivors take their lap in the early evening during the annual Mower County Relay for Life last year at the Mower County Fairgrounds. Herald file photo

Main Street from Steve’s Pizza to the Austin ArtWorks Center will be closed off for the event, which will be held from 4:30 p.m. to midnight on Friday, July 26.

For the past several years, the relay has been held at the fairgrounds, but with the move downtown, event coordinator Garrett Stadsvold is hoping to pump new life into the cause.

“I’m really hoping to gain a lot more interest,” Stadsvold said. “Being able to educate people about the American Cancer Society and what we can do for the community is huge.”

This move will allow for another beneficial part of the relay — getting businesses involved.

While taking part in relay, walkers and visitors will be able to stop in stores and take advantage of restaurants. The businesses themselves will also be displaying purple lights in their windows in a sign of support.

“The purple lights in all their windows are to enhance the feeling of the relay,” Stadsvold said. “There’s just a lot of building owners that are willing  to open up their businesses to stay later.”

The schedule of events is much the same as it has been in the past. At 4:30 p.m. the survivor caregiver reception will be held with the Annex Sound Jazz Band. At 6 p.m. there will be the opening ceremony complete with the National Anthem, Honorary Chair announcement and  speeches by The Hormel Institute’s Dr. James Robison and Dr. Luke Hoeppner.

At 9 p.m. the Luminary Ceremony will be held along with the reading of the names and the lighting of luminary candles and at midnight the closing ceremonies will be held.

Other entertainment will include Dylan Kaercher, Stix of Fury, a live DJ and the band Push.

Stadsvold said the entertainment featured is just as important as anything else surrounding the relay.

“It’s really important,” he said. “In fact, as a planner and manager of these events, entertainment is one of the most important aspects to keep the flow going and the interest there.”

In total, there are 12 teams currently signed up to participate, including a mix of long-standing teams and newer teams.

It’s enough to have Stadsvold feeling pretty good about where this relay is as well as the future of the relay.

“I think we’re in a really good spot,” he said.

It’s a step toward ensuring that the Relay for Life is a not just an event for the community, but a part of the community, a relationship between Relay, Austin and Mower County.

“More people are seeing it as a more beneficial thing helping the community,” Stadsvold said.

If you’re a military veteran, then you know that the River Rats Car Club is more than just a club.... read more