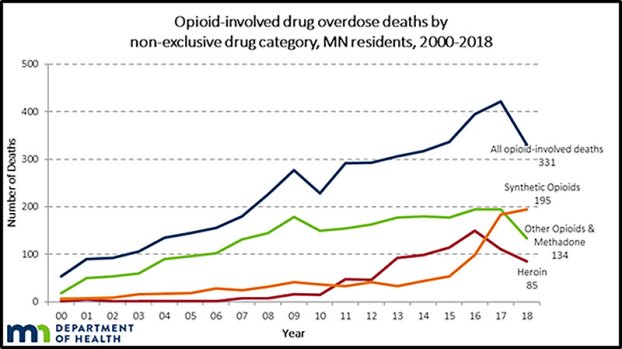 National numbers, remain at historic highs and officials warn those stats could increase

The Minnesota Department of Health on Tuesday released preliminary data showing a decrease in overall drug overdose deaths in the state, however, both state and local officials are cautioning that the threat remains high nationwide.

Preliminary statewide data, released Tuesday, reflected the decrease in overall drug overdose deaths in Minnesota, with deaths dropping 17 percent from 733 in 2017 to 607 in 2018.

However, overdose rates remain at historic highs and indicates more work ahead.

“It’s encouraging to see this turn-around in the trend in 2018 as Minnesota has implemented a broad range of efforts to prevent opioid misuse and combat the overdose crisis,” said Minnesota Commissioner of Health Jan Malcolm said in the press release. “This is good news, but we want to emphasize that this is still preliminary data and that overdose deaths continue to remain at historic highs. There is still much work that needs to be done to end this crisis and mitigate its effects.”

Chief drivers were decreases in heroin deaths and deaths that involved prescription opioids. All opioid deaths declined 22 percent from 422 in 2017 to 331 in 2018.

Locally, Austin and Mower County appear to be mirroring these drops as well as the continued need for vigilance.

“I would say we probably peaked two or three years ago,” said Austin Police Chief David McKichan adding: “It is still an issue for us out there. We’re still responding to some overdoses.”

A vast majority of the synthetic opioid deaths involved fentanyl. Of the 195 deaths, 184 (94 percent) had fentanyl listed as contributing to the death on the death certificate. Synthetic opioids are now involved in the greatest number of overdose deaths for all drugs, surpassing commonly prescribed opioids.

This decrease is just the second drop since 2000 in a rising trend of opioid-involved deaths, if the preliminary data does not substantially change. MDH’s final drug overdose numbers tend to increase as the health department receives additional death certificates for Minnesota residents who died of opioid-involved overdoses in other states. For example, last year Minnesota’s preliminary count rose from 694 in May to 733 in the fall.

More than 16,000 health care providers serving Minnesotans on Medicaid and MinnesotaCare are receiving reports comparing their opioid prescribing rates to those of their peers. Additionally, an upgrade of the Minnesota Prescription Monitoring Program will include alerts for prescribers about patients potentially misusing opioids.

Another aspect that could be having an affect on the overdose death numbers is the disbursement of naloxone, a drug used to combat the effects of opioids at the moment of an overdose.

“Part of it is, recognition (of overdoses) has improved,” McKichan said. “Naloxone penetration out into the state has been very helpful in saving lives.”

As optimistic as these numbers are, there is more work lying ahead as law enforcement and medical facilities continue to combat the epidemic.

“Obviously, there is a decrease and that’s obviously what we’re working for, but we’re ultimately working towards zero deaths,” McKichan said. “I came out of Toward Zero Deaths on driving and I think the same thing applies. Until we see zero deaths, we’ll continue to work on education, enforcement and what we need to do so that no one dies from an overdose.”

There were also neutral or positive trends related to non-opioid overdose deaths.

Data contained within this report are preliminary and may change as they are finalized. A final report is anticipated this fall.

The Austin 16U softball team has been learning a lot this summer, and Maggie Sullivan is starting to learn how... read more