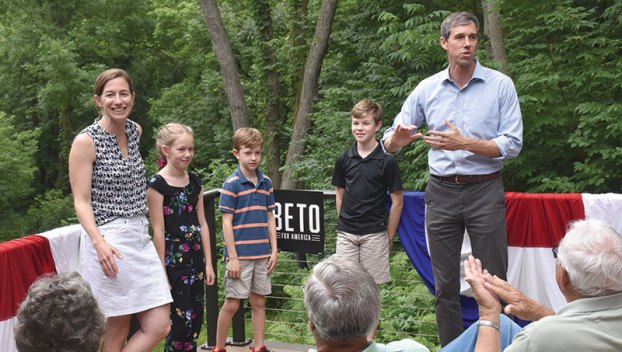 Democratic presidential candidate Beto O’Rourke chats with a crowd at the Kurt and Paula Meyer home near Mona, Iowa, just south of Lyle, on Wednesday. Appearing with him were his wife, Amy, and children Molly, Henry and Ulysses. Deb Nicklay/newsroom@austindailyherald.com

On the eve of July Fourth Democratic presidential hopeful Beto O’Rourke called for positive changes that honor the sacrifice for those who have gone before, from the founding fathers and those who fought in the Civil War, to those who stood up to racial injustice that led to adoption of civil rights laws. 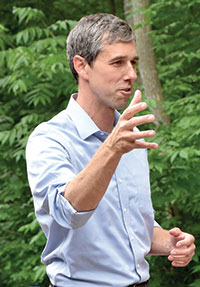 Democratic presidential candidate Beto O’Rourke said having the courage to make positive changes honors those in the past who risked their lives to safeguard the country’s vision for democracy. “This is a moment of truth for us,” he said.

“I feel like we’re at a similar moment of truth in this country here today,” said the former U.S. representative from El Paso,Texas. He was speaking to the crowd at the Paula and Kurt Meyer home near Mona, Iowa, just south of Lyle, on Wednesday. About 80 attended the event.

“(We need) to find a way to come together, and find common cause to pursue a common good, despite our differences.”

O’Rourke, who brought his wife Amy and three children to the gathering, discussed climate change (“our children and grandchildren will bear the hellish brunt”) term limits (“There is no reason for any member of Congress (to) serve longer” when even the president can only serve eight years) universal health care (will improve both physical and mental health and drive down medical costs) and the right to a living wage ($15 an hour) that will bolster the middle class.

However, he circled back to the crisis on the border between the U.S. and Mexico most often, calling President Donald Trump “something akin to an arsonist who wants credit for putting out the fire.”

“Keeping kids in cages … separating families; we need to treat asylum seekers with compassion” and “do what any human being would do under the same circumstances,” noting the families are making a 2,000-mile journey from their home countries to save their families’ lives from violence and death.

“No family wants to leave their home country … unless they have to,” he added.

He said Trump’s decision to cut all aid to Guatemala, Honduras and El Salvador, and to build a wall that will cost millions, was in direct opposition to his belief that helping those countries reduce violence would reduce asylum seekers’ need to escape to the U.S.

Detaining those fleeing their home countries in for-profit detention centers is costing Americans $775 a day per person. It would cost less than a tenth of that, he said, if asylum laws were followed as in the past.

He also called for fulfilling America’s promise for asylum seekers who, if they follow U.S. laws, can be productive.

“I think we have to look at policies that are a lot more humane … and in doing so, you don’t only unlock people, but their potential as well,” he said.

The crowd appeared appreciative. Some who attended said they had settled on O’Rourke as their pick for the nomination, while others were still scanning the field.

“I support Beto,” said Sharon Nelson of Austin, adding that when she heard he believed in raising the cap on Social Security, “I knew in that moment Beto would be a benevolent caretaker of the people.” She also said he was “absolutely right” in his immigration policy.

But Bonnie Maher of Northwood, Iowa, said she “had no idea” who her pick would be for a Democratic nominee.

“I am still trying to decide,” she admitted. “There are a lot of candidates out there.”

However, she is sure of one thing: “I want a president with integrity and honesty. I am really tired of what we have now.”

One couple even came from Texas – so to speak – to hear O’Rourke. Martha Loof of Dallas, who spends summers in Lyle, attended the hour-long talk.

“We supported him (in his U.S. Senate run against Sen. Ted Cruz) then,” she said. “We wanted to show our support now, too.”