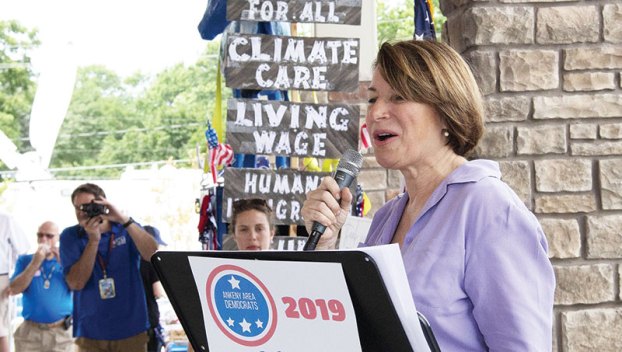 2020 Democratic presidential candidate Sen. Amy Klobuchar speaks at a campaign stop on Saturday in Ankeny, Iowa. As she trails the leading 2020 candidates in the polls, Klobuchar is sharpening her message of electability. Mark Zdechlik/MPR News

The Minnesota Democrat was one of several 2020 presidential candidates given a few minutes to address the local party faithful. And Klobuchar quickly got to the point.

“I am someone that can win,” she told the crowd. “I have won every place, every race — every time I’ve won.”

As she trails the leading 2020 candidates in the polls, Klobuchar is sharpening her message of electability. Speaking to Democrats in Ankeny, she underscored that in 2018, she won in Minnesota congressional districts President Trump easily carried just two years prior.

She suggested it’s because she’s a coalition builder, with a track record as the lead Democrat on more than 100 passed Senate bills.

“I listen to people,” Klobuchar said. “I get things done.”

Klobuchar also hit Trump hard, over and over.

“No, Donald Trump, we do not think it is tough or patriotic when you coddle up to Vladimir Putin,” Klobuchar said. “We want a president that stands up for our country.”

Klobuchar said she looks people in the eye and tells the truth.

“Maybe we need some of that in our politics today? Alright?” she said, to applause from the crowd.

Jamie Lakers, who lives just outside Des Moines, was in Klobuchar’s audience. He said he doesn’t believe the polls that show her in sixth place in Iowa; he said her campaign seems to be everywhere.

That includes Klobuchar’s opposition to some fellow Democrats’ proposals for free four-year college for everyone, or forcing people off of private health insurance and on to Medicare.

Lakers said he’s more concerned about electability than anything. He said he thinks former Vice President Joe Biden — who like Klobuchar is more moderate than many of the other Democratic hopefuls — is too old to run for president.

Ankeny resident John Tagliareni also was in the crowd, and also said he likes Klobuchar. He said he thinks she’s offering a much-needed moderate approach that’s grounded in the reality of getting things done in Washington. He said it’s unfortunate that “moderate” has become a dirty word among both Democrats and Republicans.

“All those promises are wonderful, but the reality is you’re not going to get everything you want, and somebody that’s a little bit more realistic, I think, is a good thing — because the answer is not Democrat or Republican,” he said. “The answer tends to always be in the middle somewhere.”

At a stop later Saturday in Ames, a half-hour away, Klobuchar took more direct aim at other Democrats running for president.

“People are making promises out there, OK?” she said. “I’m only going to make you promises that I can keep.”

She also underscored her electoral success.

“I have won more than any of these other people,” she claimed.

After her speech and finally pulling away from fans who wanted autographs and pictures, Klobuchar said she thinks her electability message is beginning to resonate with Democrats who don’t think free college for everyone, and Medicare for all, are reasonable proposals.

“None of these ideas will mean anything if Donald Trump is still in the White House,” she said.

Klobuchar said her campaign has enough money to win, and said she’s confident she’ll meet polling and fundraising thresholds to qualify for the September debate, which will exclude the least popular contenders remaining in the Democratic field.

She acknowledged it’d be nice to be polling higher than sixth place in a state neighboring Minnesota. But she said hard work and a strong first debate performance in June have left her among the top 10 candidates in national polls.

“I always like to joke that I’m ahead of like 18 people … including the mayor or New York City and every governor,” Klobuchar said.

Iowans who support Klobuchar insist she is in the running for the Democratic presidential nomination. They said to remember that candidates like Jimmy Carter in 1976 and Barack Obama in 2008 were hardly front-runners at this stage in their presidential campaigns.