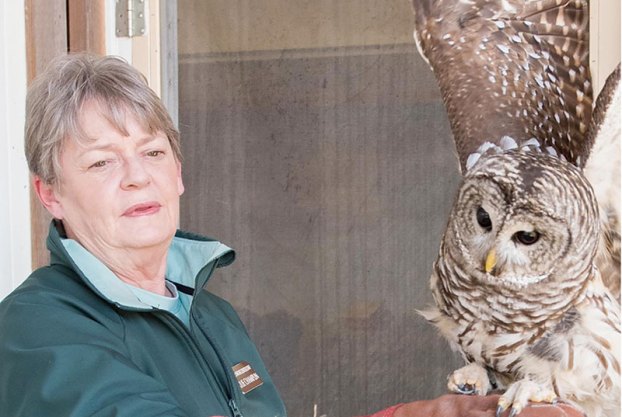 For many, many people who have contacted or visited the Jay C. Hormel Nature Center over the last 32 years, Julie Champlin has been the friendly voice or the welcoming face they first encountered.

Julie loves people, as well as animals and nature and she is very proud of the nature center and how it has grown. In 2018, more than 85,000 people visited the center and 15,000 people were active participants in environmental programs, including school field trips, family programs, summer adventure classes and more.

Julie started her nature center adventure as a volunteer in 1987 under Director Vince Shay. When Larry Dolphin became director in 1988, she continued to volunteer at the center and then in 1995 worked part-time as an assistant and teacher.

Julie was part of the Friends of the Hormel Nature Center Board that expanded the center with a generous donation from Margaret Beck and other community donors with the addition of the Ruby Rupner Auditorium. At that time, space was needed to serve school groups of as many as 60 students or more at a time and programs that could seat 175. The idea of renting the auditorium for other events was just considered a possible additional use. Julie says the women board members insisted that a functioning kitchen absolutely must be included in the plan. Moreover, as it turns out, the Ruby Rupner Auditorium has become a favorite venue for graduation parties, weddings, receptions, memorials and family reunions.  Currently there are 12 graduation parties booked for 2020! These rental fees are an important source of revenue.

Julie’s responsibilities have evolved over time. She began working full time with the nature center in 2000.  Essentially, whatever needed to be done, Julie did. There has been lots of teaching, and administrative work, like newsletters and correspondence, as well as helping interns and mentees. She has been the primary organizer for the big Thanksgiving Feast fundraiser for the last 16 years, helping solicit up to 350 auction items, then cataloging and displaying them and sending out receipts and thank you notes.

Julie’s eyes sparkle when she tells of another challenging area of her work, rescuing injured raptors. She was trained by Larry Dolphin to be a “first responder” when a call is received about an injured hawk, owl or eagle. “Triage” is provided, with hydration, bandaging, and transport, either to the Raptor Center at the University of Minnesota or, in sad cases, to local veterinarian who volunteers to euthanize the birds who can’t be saved.

After several years of planning, the opening of the new interpretive center on Earth Day, April 22, 2017, was a huge thrill for the center staff. Julie says she feels so privileged to be a part of this next chapter. As the senior staff member, she enjoys helping Director Luke Reese when questions come up about the history and changes that have occurred. Rentals of facilities have tripled with the new building, so Julie’s responsibilities as rental coordinator have expanded. An outdoor amphitheater is in the planning stages, and that will again expand outdoor programs and rentals.

Julie and her husband, Duane, who also volunteers at the nature center, grew up in Austin. Julie loved the outdoors and nature from early childhood, first roaming open areas near her home on 21st Street Northwest near Turtle Creek and later riding her bike to “King’s Woods,” Jay Hormel’s arboretum, which later became the nature center. Her degrees from the University of Minnesota are in parks and recreation management and forestry. After initially working in cardiac rehabilitation in Minneapolis, she helped start the cardiac rehabilitation program in Austin.  Duane and Julie have two daughters and she was home with them until they entered junior high school. As they went to school, she looked for volunteer activities that fit with their young family, and the rest became her history as an integral part of Jay C. Hormel Nature Center. Julie says she is glad she is still a few years away from retirement, because she still absolutely loves her job. “I learn something new about nature every day!”

Austin thanks you for being the devoted, adaptable, capable, knowledgeable, and loving champion of Jay C. Hormel Nature Center!