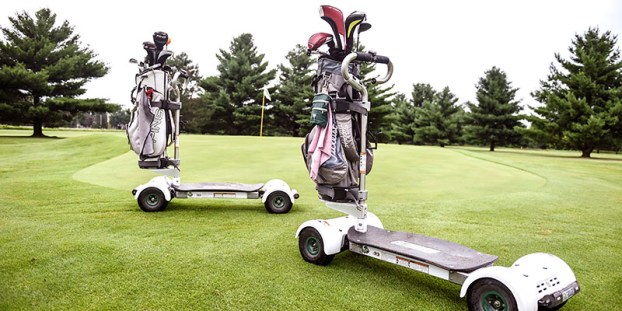 Golf Boards, recently purchased by Meadow Greens, will give players a unique experience during a round of golf. Eric Johnson/photodesk@austindailyherald.com

There are some people that think the game of golf is too old fashioned and too slow for the next generation.

Those people have never gotten on a Golf Board. 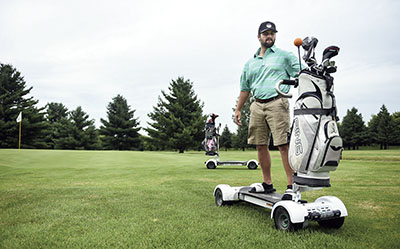 Riley Grinstead drives away form a green at Meadow Greens Thursday on a Golf Board, one of four the golf course has recently purchased. Eric Johnson/photodesk@austindailyherald.com

Meadow Greens Golf Course made a big move towards excitement when it introduced the golf board this past week. The device, which won the Best New Product Award at the 2014 PGA Merchandising Show, gives the rider the same experience as one would find on a surfboard.

“The speed of play is a little faster and going to the ball is much more enjoyable,” said Riley Grinstead of Meadow Greens Golf Course. “You’re out there riding on a little board and that makes it 10 times more enjoyable.”

The golf board has two speeds, allowing riders of various ages to use it. Mike Grinstead, general manager of Meadow Greens, said it has already been a hit amongst golfers of all ages.

Riley said that Meadow Greens was looking to try something different on the course and originally they thought about bringing in fat bikes last year. When the idea of golf boards came up this year, the course decided to make the move. 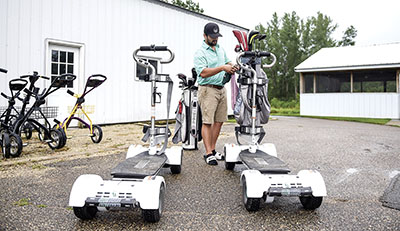 “This seemed a little more appealing,” Riley said. “You can jump right off your board and get right next to the ball and you can get a little closer to the greens. Overall, it seemed like a good idea for people to enjoy golf a little more without just riding in a cart.”

There was some risk for Meadow Greens to add the boards to their inventory, but Mike said it’s well worth it for the chance to bring the game of golf to a new group of players.

“Nothing ventured, nothing gained. We’re trying to involve more people in the sport and get more people to come out to Meadow Greens to avoid the game,” Mike said. “It seemed like a unique opportunity to try and get some different (kind of) fun in here. So far it’s working. There’s been a lot of buzz about it, a lot of people have tried them and a lot of people like them.” 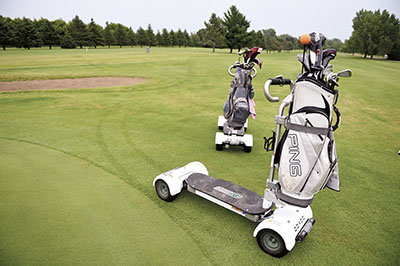 Golf Boards, recently purchased by Meadow Greens, will give players a unique experience during a round of golf. Eric Johnson/photodesk@austindailyherald.com