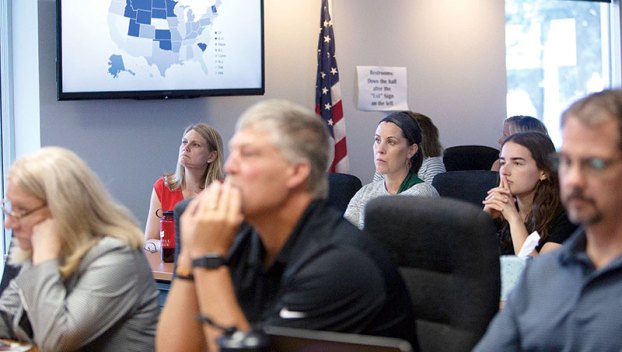 They gathered with about 60 teachers, school administrators, sheriffs and education policy advocates for a three-hour session in a conference room in St. Paul.

There were no lockdown drills. There were no students huddled behind their desks, no security experts firing off blank rounds to simulate shootings.

It was really more of a lecture.

Peterson and Densley focused on data presentations and crisis intervention skills for adults in school: things like de-escalation and suicide prevention.

“Violence prevention is about identifying kids in crisis, it’s about having response plans,” Peterson said. “It’s a very different framework. It’s about building relationships, it’s about a shift in school culture. And part of what we’re trying to do is create that shift in people’s minds — to think more broadly and comprehensively about violence prevention and what it is and what it looks like.”

Their new approach to safety and crisis training comes from research they’ve conducted based on a database they built of 160 mass school shootings in the United States since 1966.

Part of what Densley and Peterson suggest is reworking school safety assessments. Instead of just focusing on beefing up security or perfecting evacuation techniques, they suggest making a plan to provide students with mental health aid.

The researchers said this new approach to training is a way not just to address mass shootings, which are relatively rare. Densley said it can also help prevent much more common problems around violence or well-being in schools.

“We’re trying to shift this to a thinking around holistic violence prevention. The same steps you could be taking to prevent the extreme mass violence could also actually be preventing the low-level violence: the bullying in the school, and also addressing some of the trauma in the communities where violence is most prevalent,” Densley said.

Peterson and Densley said this training, hosted by Minnesota’s teachers union, is just a pilot. They’re gathering feedback from participants and hoping to roll out more trainings for school and law enforcement leaders. But they say there’s definitely an appetite for a new approach to preventing school violence. After sending out an invitation to five people in their network, they say the 60-person workshop was filled to capacity within 24 hours.

“It’s a different way of thinking,” Peterson said. “It takes a while to sink in.”

DES MOINES, Iowa — Justin Grunewald carries a lock of her hair with him as a remembrance. He has countless... read more