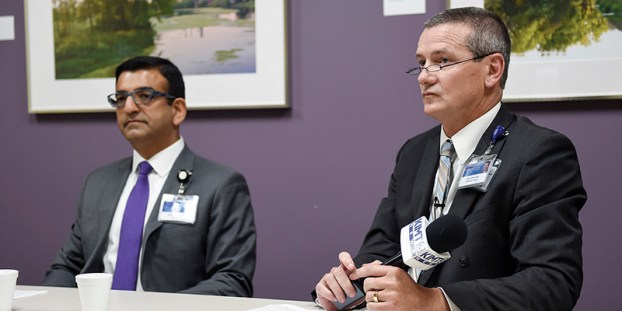 Mark Ciota, M.D., chief executive officer, along with Sumit Bhagra, M.D., medical director for Mayo Clinic Health System in Albert Lea and Austin, take quesions Thursday morning during the announcement that the timetable for transitiioning labor and delivery has been moved up to this October. Eric Johnson/photodesk@austindailyherald.com

In a move that wasn’t completely unexpected, Mayo Clinic Health System officials announced Thursday they were moving up the timeline for transitioning all labor and delivery operations to the Austin location to this October.

Originally slated for October of 2020, labor and delivery services will now begin the move the week of Oct. 28, 2019, with the consolidation aiming for completion by Oct. 30.

“We were hoping to do the transition in October of 2020 based on our best estimates of staffing and construction,” said Mark Ciota, M.D., chief executive officer of Mayo Clinic Health System in Albert Lea and Austin. “The thing that really brought that on now is an urgent staffing shortage.”

Contributing to the shortage was the unexpected departure of a member of staff as well as a struggle to recruit staff from outside.

Sumit Bhagra, M.D., medical director of Mayo Clinic Health System in Albert Lea and Austin said Mayo first started looking at the possibility of bumping up the timetable about a month ago, after they found out about the departure.

“If we went any longer with the remaining obstetricians, they would need to be on call every other day (at the two locations),” Bhagra said. “That’s just not maintainable.”

While the schedule of labor and delivery services has been moved up, the timetable for completion of the new Family Birth Center remains on track for completion in 2020. When completed it will offer:

Ciota said work will continue to meet staffing needs and current staff will have the opportunity to transfer if desired.

“We’re recruiting both nurses and physicians,” he said. “Nurses, if they so choose, will have a position in Austin.”

In the meantime, officials said they will work with current staff as well as patients to ensure that expectant mothers continue to get the care they need.

Pre and postnatal care will still be maintained in both Austin and Albert Lea.

“We will continue to offer pregnancy, postpartum and newborn/pediatric outpatient (clinic) care on both Albert Lea and Austin campuses,” Bhagra said. “After being discharged in Austin, new moms and their babies will be able to continue to receive all follow up care from their regular provider on either Albert Lea or Austin campus.”

The sting of losing these services, however, can still be felt in Albert Lea. On Wednesday, the Albert Lea group Save Our Healthcare announced that it was taking the next step as they attempt to lure another provider to Albert Lea.

The group is asking Albert Lea businesses to get behind bringing the new provider to town, which would take place in five phases.

“We need your participation in this,” said Craig Ludtke, one of the group’s leaders. “You will be the deciding factor in whether this moves forward.”

Bhagra said, however, that Mayo remains committed to serving its patients, but couldn’t comment on Save Our Healthcare’s announcement.

“Mayo remains committed to serving both Albert Lea and Austin,” he said.

Bhagra also said that officials from both hospitals will help expectant mothers who may be giving birth around the time of the move with any extra planning they might need, including those in rural communities.

Ciota related that as of Thursday, Albert Lea has had 167 births (approximately, one birth per day), while Austin has had 225 births (a little over one birth per day). He is hoping that with the consolidation, Mayo will be able to pull in a few more births from the region.

Currently, about 30 percent of births in Freeborn County take place outside of the county, going to places like Owatonna, Mason City, Iowa, and Olmsted Medical Center.

“Those are significant drives,” Ciota said.

Despite the transition of services, Mayo maintains it will be a major healthcare presence in Albert Lea. Ciota addressed concerns he has heard over the state of the emergency room in Albert Lea.

“The ER will be state-of-the-art and will be able to handle every emergency,” he said, adding they are looking into possibly renovating it.

Emergency medicine Dr. David Aaron McAlpine, medical director and EMS medical adviser for the Interstate 90 corridor for Mayo Clinic Health System in Albert Lea and Austin, said hospital-wide leadership, including from the emergency medicine, obstetrics and gynecology, and neonatology departments, have met regularly to solidify and incorporate training and preparation efforts for if a woman in active labor comes into the emergency room.

The staffing model provides 24/7 coverage by staff who are certified in the nationally accredited Neonatal Resuscitation Program.

He said 100 percent of the physicians hired for Albert Lea’s emergency department are certified by the American Board of Emergency Medicine. This certification includes completion of a nationally accredited three- to four-year residency program in emergency medicine, which includes dedicated months toward obstetrical training, delivering babies and caring for patients with emergent obstetrical needs of both mother and child.

He also wished to thank staff for their work during this period.

“I want to make sure we show our appreciation for our staff,” Ciota said. “They continued to provide excellent care. It’s a loss for them, but sincerely, on behalf of leadership, we thank them for their service.”

The Austin Post 1216 baseball team punched out 12 hits as it beat Waseca 11-1 in six innings in Waseca... read more