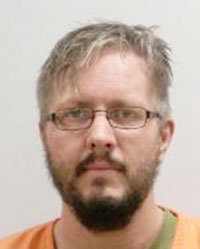 According to the court complaint, police responded to a domestic disturbance at about 10:48 a.m. on Thursday to an apartment house in the 400 block of Eighth Place Northwest. They made contact with a man who said Winkel had assaulted him. He also alleged Winkel said he had a firearm and had threatened to burn down the building.

The man told police the incident began after Winkel left a hose running in the man’s garden. He told Winkel to leave his garden alone and use “common sense,” at which point Winkel got mad and began “chest bumping” him in the hallway between their apartments. He then alleged that Winkel followed him into his apartment, grabbed him by the throat and pushed him up against the wall. The man then threw punches at Winkel and held his arms until Winkel let him go and left the apartment. He then closed and locked the door, but Winkel started pounding on it, prompting a female neighbor to tell him to stop.

The man and the neighbor went downstairs, followed by Winkel. The man told police he and the neighbor tried to talk to Winkel, but Winkel grabbed a wire trellis and “came at” him. He took the trellis from Winkel and took him to the ground. After releasing him, he alleged that Winkel said he had a firearm and that he was “going to burn the place down.”

Police photographed the man’s injuries – a scratch on his left cheek, blood above his right eye, an injury on his neck and a cut on his right hand. It was later determined the man fractured a finger on his right hand during the altercation.

Police spoke to the neighbor, who said she heard the man telling Winkel he could not come into his apartment, followed by him telling Winkel to remove his hands from his throat. She told Winkel to stop, but he continued acting aggressively. She said they attempted to talk, but Winkel attacked the man with a wire trellis, prompting her to go inside and call the police. When she came out, she saw the man holding Winkel on the ground. She indicated Winkel said he had gasoline that he would use “to burn the whole house down” and that he had firearms that he would use on the man.  She believed Winkel had been using methamphetamine.

Police attempted to make contact with Winkel, but he refused to open the door. Police then obtained a search warrant, entered the residence and took Winkel into custody. Winkel complained of pain in his right ankle and was examined at the hospital before being taken to jail.

Winkel told police the man called him “every name in the book” after the incident with the garden hose. He admitted there was a physical altercation, saying the man punched him and pulled him into the apartment, where they “went into the wall.” He said the altercation continued outside, where he alleged the man continued punching him, threw him to the ground and “stomped” on his ankle several times. He indicated he used the wire trellis to defend himself and apologized to the neighbor for threatening to burn the house down.

A review of Winkel’s criminal record shows prior convictions for domestic assault, theft of a motor vehicle, fleeing a peace officer in a motor vehicle and obstructing ambulance personnel attempting to provide emergency care.

Winkel will appear in court again on July 25.

Local wildlife managers across the state are again inviting the public to come to open house meetings to ask their... read more