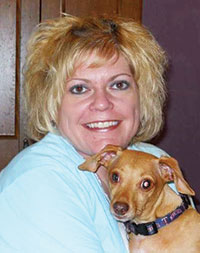 Lori was born to Ralph and Rosemary Donkers on July 23, 1971, in Austin. She spent the first 19 years of her life in Austin and enjoyed participating in Girl Scouts, playing volleyball, swimming at the local pool, performing with the school orchestra and socializing with friends and family. She graduated from Austin High School in 1989 and earned an Associate of Arts degree from Austin Community College in 1991. She lived in Albuquerque, New Mexico, for a year before moving on to Rochester, Minnesota, in 1992 and finally settling in the Twin Cities area in 2002.

She was a social person who made friends wherever she went. Her bubbly personality, sense of humor, beautiful smile, and deep caring of people drew others to her. These traits served her well in her chosen professions throughout the years. In high school she worked as a kitchen aide at Sacred Heart Hospice, where the residents connected with her positive spirit. Her passion of caring for others was even more apparent when she began working with clients in a group home setting and continued in this type of work for over 15 years. She spent the past 12 years working as a billing specialist, helping Medicare patients by guiding them through the challenging billing process.

Two of Lori’s favorite things were traveling and music. Her love of music started at age five, when she began playing the violin, and continued throughout her life by attending the concerts of her favorite artists. If Prince, the Pixies, Bob Mould, or her other favorites were in town, then she would be there. Her idea of a great vacation would combine travel with attending a concert. She had many great travel adventures to Las Vegas, New York, Denver, Albuquerque, and Chicago to attend concerts, visit family, or have some fun.

Through the years, Lori developed a great talent for cooking and party planning. You would often find her watching the Food Network and writing down new recipes. One of her most treasured belongings was the recipe box she inherited from her grandmother, Loretta, which contained many family recipes. Lori was the consummate party planner who never thought twice when anyone asked her to help with a special occasion. You never needed to worry about eating well when visiting Lori’s home because she knew everyone’s favorite dish and would whip up something delicious.

Lori loved her family and friends with great intensity and would do anything for them. She was especially excited to become an aunt and loved spending time with all of her nieces and nephews. Her beloved dog, Jerry, was her constant companion for many years before he passed a year ago. She loved him dearly and enjoyed being a dog mom. She will be missed by all the people that were touched by her kindness, laughter, and giving spirit.

The family would like to recognize the close friends Lori had throughout her life that touched her heart and became a part of our extended family. You know who you are, how you made an impact on her life, and how she touched yours. We thank you for the love and support you always showed our dear sweet Lori.

A memorial Mass will be celebrated at 11 a.m. on Monday, July 8, 2019, at St. Augustine Catholic Church with Father Jim Steffes officiating. Friends may call from 3-5 p.m. on Sunday, July 7, 2019, at Mayer Funeral Home and for one hour before the service on Monday at the church. Interment will be in Calvary Cemetery. Condolences may be left online at www.mayerfh.com.