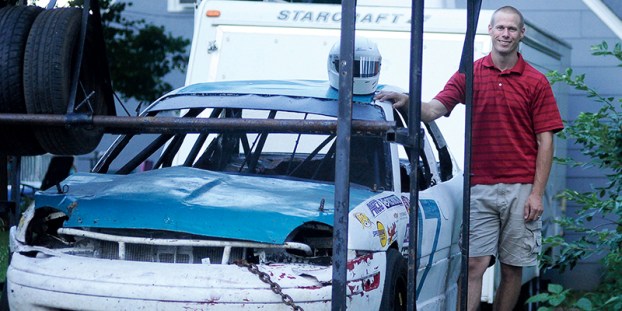 Ryan Timm has always wanted to go fast, whether it be by foot or by car.

Timm, who is the Austin boys track and field head coach and a teacher at Southgate Elementary, spends a good portion of his summers competing at Chateau Speedway in Lansing and although he’s never notched a win, he’s always happy when he’s on the track.

Timm embraces the adrenaline filled rush he gets on the dirt track at Chateau and he also likes to test his endurance in enduro races, which can last for about an hour.

“There is certainly a rush that you get in racing and I want to keep doing it for as long as I can,” Timm said. “It’s so fun.”

Timm grew up as a successful sprinter and set the school record in the 100-meter dash while attending college at Wisconsin Lutheran in Milwaukee. He also competed in the decathlon. 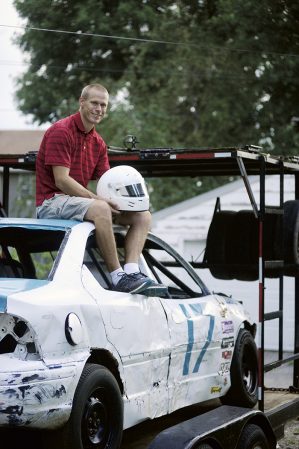 Austin head track and field coach Ryan Timm has been active in racing at Chateau Speedway since he moved into town in 2013. Rocky Hulne/sports@austindailyherald.com

Timm took his sprinting seriously, but he spent an equal amount of time being fascinated by auto racing. The New Ulm, Minnesota native was hooked at a young age and his biggest inspiration came from his neighbor Jim Schugel, who was also an avid auto racer.

“He taught me everything I know about cars, perseverance, and problem solving,” Timm said of Schugel. “He is super patient and is one of the funniest people you will ever meet.”

While Timm has never actually won a race in 15 about 15 years behind the wheel, he has come close twice. On both occasions he found himself in first place in the final lap before technical difficulties slowed him down.

While those setbacks were frustrating Timm, who moved to Austin in 2013, isn’t about to give up on auto racing any time soon.

“It’s a great way to make new friends,” Timm said. “The racing community is very friendly and it’s a different group of people from my teacher friends.”

Timm is currently sitting in 10th place in the Y-WISSOTA Hornets with 469 points at Chateau. Justin Schelizche of Cologne, Minnesota leads the field with 701 points.

Timm also plans on racing in the enduro race at the Mower County Fair on Aug. 7.

Austin Eagles 14 U fifth at state

The Austin Eagles 14U baseball team finished tied for fifth out of 32 teams at the Gopher State Tournament this... read more