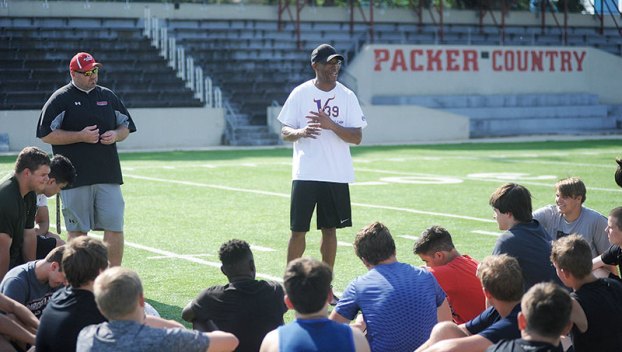 Learning from the best: Austin football team practices with a three-time Pro Bowler

Former Viking and three-time NFL pro bowler Carl Lee has become familiar with Austin over the last few years and he reacquainted himself with the Austin football team at Art Hass Stadium Monday.

Lee, who worked with many of the current Packers at his youth camp, helped run Austin’s team practice as he handed out tips to defensive backs and gave the team some motivation with a post-practice speech that focused on making every down count.

Lee, who played 11 of 12 his 12 NFL seasons with the Minnesota Vikings was active throughout the day as he was mentoring the Packers on how to match up on pass coverage. 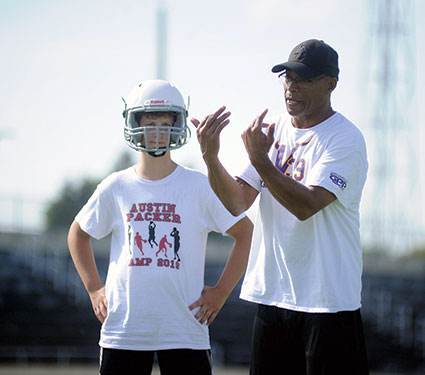 “It’s always cool to watch the growth of young players. It’s amazing that some of those guys were in my camp back in the day,” Lee said. “There is nothing more rewarding than being able to work with these kids at a young age and then to be able to come back and work with them again. Just to be part of it is a special thing to me.”

Austin head coach football coach Ed Schmitt has wanted to bring Lee in to work with the varsity team for the past few years, and he was thrilled when Austin resident Brandon Lawhead helped bring Lee to the team for a day.

“It’s a huge asset to the program and the community as a whole to have a guy like Carl Lee come in here and share his knowledge and his passion for the game,” Schmitt said. “Us coaches saying it is one thing, but to have an All-Pro who played for the Vikings is another thing for the kids to grasp and hang onto.”

While the focus was on the defense, Austin quarterback Elijah Johnson used the practice session to learn about what secondaries are trying to do.

“From an offensive perspective, it’s nice to get all of his knowledge on defense, so I can use it to pick apart defenses,” Johnson said. “I can flip it on them and see how they’re trying to work against us.” 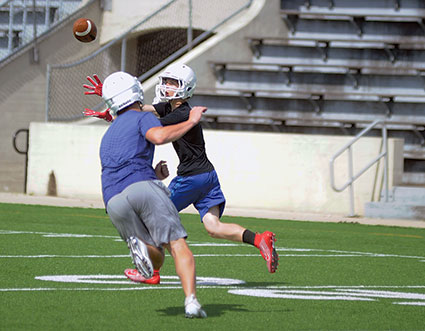 Asher Persons tracks down a pass.

“I’ve been water boy since I was in fifth grade and every year it seemed like one of the senior captains went down with an injury,” Andersen said. “They’re playing well, they go down and it’s just done. I’ve helped a couple of them off the field I’ve seen them realize they won’t play football anymore. It’s really hard to see (it come to an end) and I want to make the most of this year.”

Schmitt said that the Packers haven’t had a full team practice yet, but he’s liked what he’s seen in the position practice sessions so far. The full team will get together for its first full summer practice on July 22.

“We’re teaching them our basics and techniques,” Schmitt said. “So far so good. The kids are grasping it, they enjoy being here and they’ve been getting some summer time as well.”

Austin football running back and linebacker Andy Chesak said that there is a lot of energy behind the Austin football program this summer and he’s looking forward to the fall.

“Everybody is so excited about this year,” Chesak said.

As for Lee, he said that he feels satisfied about playing out his full career before his body gave out, but he does wish he had the chance to play in today’s NFL.

Lee also wishes he would’ve had the chance to match up with former Viking Randy Moss, who is a friend of his.

“I think Randy Moss is the greatest receiver just because of his physical dynamics, but I would’ve loved to have had the chance just to play one-on-one with him, even if he beat me,” Lee said.

The Austin football team will host its youth camp on July, 22-24 with sessions running from 3-5 p.m.

The Austin Post 1216 VFW baseball team picked up a pair of shutout wins as they beat Cannon Falls 8-0... read more