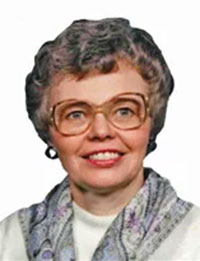 She was born on Jan. 15, 1939, in Belle Plaine, Minnesota, to Mark and Dorothy Murphy and attended a country school near the family farm through elementary school. She went on to graduate from Belle Plaine High School in 1956 and Mankato State College with a major in physical education and minor in math in 1959.

She took her first teaching job in Madelia, Minnesota, the following fall. On Oct. 28, 1961, she married Michael Leo Garry of Delavan, Minnesota. They taught school together in Carroll, Iowa, for one year while also starting a family.

The rapidly increasing Garry family made stops in Marion, Iowa, and Northfield, Minnesota, before settling in Austin in 1968. Together the pair had eight children. Shortly after their youngest was born, Kitty went back to work, teaching physical education at Queen of Angels beginning in 1974.

She remained a much-loved gym teacher in the Austin Catholic School System for 39 years, retiring in 2013. While working and raising a large family, she also found time to enthusiastically volunteer for countless Queen of Angels and Austin Catholic school activities and events over the years. This was in addition to helping her children with their paper routes and math problems and her husband in the print shop the couple operated out of the basement of their home.

She enjoyed the challenge of cooking for big groups and looked forward to the holidays with the children and grandchildren coming to town. Her egg bakes after Mass remain unsurpassed within the family.

Kitty was a huge fan of her family’s involvement in athletics, something that continued on with her passionate support of her grandchildren and their activities over the years. She remained the area’s No. 1 fan of the Minnesota Twins — and a huge fan of baseball and softball in general — to her last days.

She was preceded in death by her mother, Dorothy; father, Mark; and grandchild, Ben Garry.

The family wishes to thank the staff at Sacred Heart for their loving care of Kitty over the last four years.

A funeral Mass will be celebrated at noon on Saturday, July 13, 2019, at Queen of Angels Catholic Church with Father James Russell officiating. There will be a 4 p.m. CCW rosary on Friday, July 12, 2019, at Mayer Funeral Home, where friends may call from 4-7 p.m. Visitation will continue for one hour before the service on Saturday at the church. Interment will be in Calvary Cemetery. In lieu of flowers, memorial gifts may be made to the Alzheimer’s Association, Benny’s Books, Queen of Angels parish and Pacelli Catholic Schools. Condolences may be left online at www.mayerfh.com.