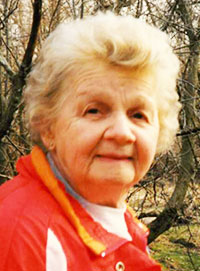 Joan was born Nov. 9, 1924, in Dodge County, Minnesota, to John and Mathilda (Dahl) Capretz. She graduated from Mantorville High School and was a lifelong Southern Minnesota resident. On June 12, 1945, Joan was united in marriage to Afton “Pat” Coffman in Kasson, Minnesota. To this union two children were born, Cheryl and Greg. In 1961, Joan started working as a clerk at Knauers Food Market in Austin. Joan and her husband Pat both retired in 1981. Upon retirement, the couple traveled all over the United States and loved to winter in South Padre Island, Texas. Joan was a member of the Eastern Star. She was proud of the fact that she was raised during the Great Depression and has shared many inspiring stories.

Survivors include her two children, daughter Cheryl (Phillip) Dowd of Austin and son Greg (Helen) Coffman of Wabasha, Minnesota; four grandchildren, Jeff Dowd, John Dowd, Malinda (Chris) Wise and Benjamin (Maria) Coffman; and six great-grandchildren, Joseph, Andrew, Elliot Wise, Rose, Henry and Korra Coffman. She was preceded in death by her parents, John and Mathilda Capretz; husband, Pat Coffman, in 1995; and all of her 14 siblings. Joan will be missed by all who knew her.

Memorial services will be held at 11 a.m. on Wednesday, July 3, 2019, at Worlein Funeral Home Chapel in Austin. Visitation will be held one hour prior to the service on Wednesday at the funeral home. Interment will be in Oakwood Cemetery. Memorials can be directed to recipient of donor’s choice. Services are pending with Worlein Funeral Home of Austin. Condolences may be expressed to the family online at www.worlein.com.