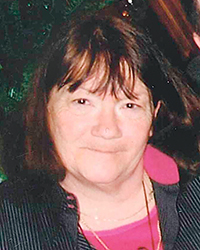 Jem E. (Wellmann) Churchill, 67, of Austin, Minnesota, passed away on Saturday, July 13, 2019, surrounded by her loving family at Good Samaritan Society-Comforcare in Austin.

Jem Elise was born Feb. 8, 1952, in Austin to Sylvester and Imogene (Welsh) Wellmann. Growing up in Austin, Jem attended Austin Schools and graduated with the Class of 1970 from Austin High School. She was a member of the synchronized swim team Jem was a dedicated mother first and foremost. She treasured her five children and embraced every moment with them as a stay-at-home-mom. In 1986, she returned to the workforce with Hecla House in Austin before becoming part owner of the Antique Mall in Lyle, Minnesota, with her good friend Doreen. She later worked for The Tendermaid, then Kmart before retiring from Shopko in 2018 after many years of service. She loved garage sales, antiquing, and exploring the countryside on a beautiful day. She especially loved her role as grandma to her five grandchildren, great-grandchild, and all of her four-legged grand-pets.  Jem’s spirit and compassion was touched by all that came into her life.  She was known for putting others before herself.

A celebration of life gathering will be held from 11 a.m. to 2 p.m. on Saturday, July 27, 2019, at Christ Episcopal Church with lunch and refreshments provided. Clasen-Jordan Mortuary is assisting the family with arrangements.

The Parenting Resource Center is currently hiring in preparation of the 2019-20 school year. The position is riding the SMART... read more