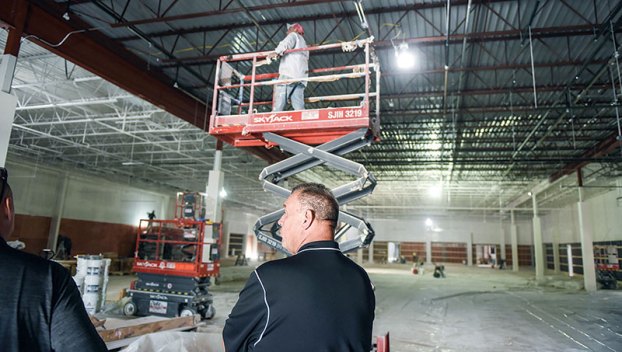 Dean Slaby stands inside of the store space for the incoming Marshalls Tuesday afternoon as a man works on a lift. Photos by Eric Johnson/photodesk@austindailyherald.com

As summer begins to wind down, so does construction work at the old Hy-Vee building.

Workers from KSW Construction have spent the better part of the past year updating the old Hy-Vee building to accommodate new tenants Marshalls, Pet Supplies Plus, Five Below, Shoe Sensation and Maurices.

Doug and Dean Slaby, owners of Verona, Wisconsin-based firm Slaby and Associates and KSW Construction, and Slaby and Associates Vice President Victor Baeten allowed the Herald inside the building to see the progress. Slaby and Associates purchased the old Hy-Vee for $400,000 from the Austin Port Authority last year on the condition it would market the 52,000 square-foot building for five tenants, including an anchor store. 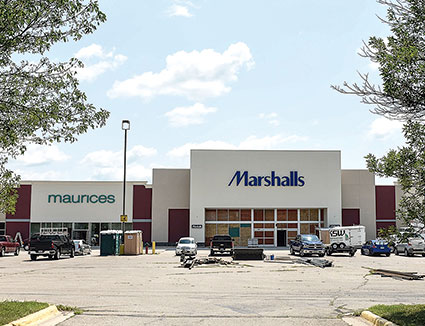 The old Hy-Vee site is nearing completion at its location along 18th Avenue NW.

“We’re excited to be a part of it,” Dean said. “We love Austin; they’ve been really great to us. We’ve got other things coming in the future that we’re excited about too.”

“This project began in June of 2016 with a simple meet and greet with the Port Authority,” Baeten said. “We have had some ups and downs through the process as we worked towards making a redevelopment make sense financially for all.”

Marshalls, Five Below and Pet Supplies Plus were the first tenants to submit letters of intent, signing leases in December. Maurices and Shoe Sensation, the smallest of the new stores, signed on earlier this year.

Marshalls is the largest of the stores, located in the center of the building. It is flanked on the east by Shoe Sensation and Maurices and on the right by Five Below and Pet Supplies Plus.

Interior walls have been put up to separate the respective spaces. While the stores are still empty, Slaby and Associates are hoping to have the construction phase done for all but Marshalls by early August. 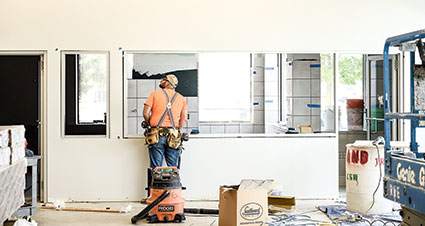 A man works on a window assembly inside of Pet Supplies Plus Tuesday afternoon. Eric Johnson/photodesk@austindailyherald.com

“Marshalls will be (done) about mid-to-end of August,” Doug said.

While they hoped to reutilize the building as much as possible, there were some instances in which doing so was not possible.

“We tried to reutilize some of the former Hy-Vee floor, but because we ripped off the front of the store, and because this was the old kitchen area, a lot of the plumbing and gas lines were in the floor,” Baeten said, referring to the west end of the building where Pet Supplies Plus will be located. “We had to rip out a good chunk of the floor and put in some brand new concrete because the floor was in such bad condition. Those are some of the little unforeseen things that add up in cost. (Pet Supplies Plus) alone, after the demolition, was $550,000 plus in this space alone. Marshalls was $1.2 million. That doesn’t include any of the façade.”

While costs have not yet been closed out, Baeten estimates that Slaby and Associates has invested over $5 million into the project, roughly several hundred thousand dollars over budget.

“I think it’s safe to say that we didn’t and couldn’t put lipstick on a pig to attract these types of tenants to Austin, Minnesota,” Baeten said. “Each tenant has their standards that we had to cater to individual needs and designs.”

Doug said that work on the parking lot would begin on Monday. 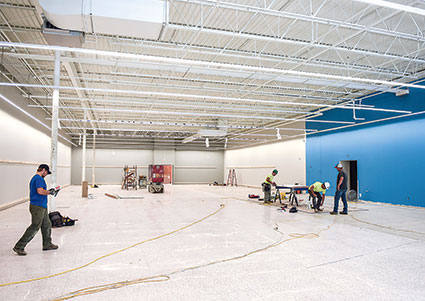 Pet Supplies Plus nears completion at the Slaby & Associates complex Tuesday afternoon. The complex will also include four other businesses. Eric Johnson/photodesk@austindailyherald.com

“We’ll do asphalt, sealing, restriping, get everything cleaned up and put together and get all of the curves painted,” he said, adding they hope to have it finished by Aug. 5.

Once construction is complete, the tenants will begin the set-up process of their respective stores. While all will be in need of shelving units for their products, Baeten pointed out that Pet Supplies Plus will also have a space for grooming, a community room to host events and a public pet wash area.

“I think one of the areas that will be a big hit is the public pet wash,” he said. “If your dog gets sprayed by a skunk, you don’t have to throw him in your bathtub, you can just bring him here and leave the mess with us.”

There are no official opening dates yet. Baeten said they have heard of a late September or early October grand opening.

“Everyone is waiting on Marshalls to announce first to coordinate their openings,” he said. 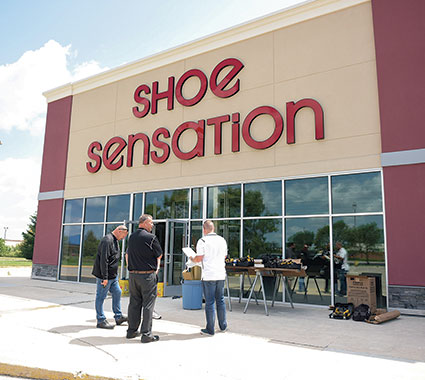 Doug Slaby, from left, Dean Slaby and Victor Baeten stand in front of the store front for Shoe Sensation during a tour Tuesday afternoon. Eric Johnson/photodesk@austindailyherald.com

The grand opening date will be the culmination of roughly three years worth of work and coordination between the City of Austin and Slaby and Associates.

“I have personally discussed this project with over 200 different tenants,” Baeten said. “There was a lot of educating of where Austin, Minnesota, existed on a map. We have fully exhausted our efforts to fill the former Hy-Vee by making aggressive rent deals to attract the higher quality of tenants.  This is a project my partners and I are proud to be a part of. The City of Austin and the Port Authority members have been great partners. Dean, Doug and I look forward to additional partnerships when the opportunities present themselves.

“It’s very exciting. We’re hoping (the stores)  will be here long term. It will be good for the community.”

Relay for Life will be held from 4:30 p.m. to midnight on Friday on Main Street. The schedule of events... read more