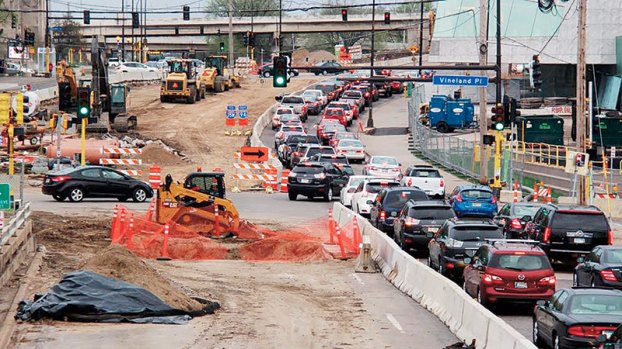 Bumper to bumper traffic on southbound Hennepin/Lyndale at Vineland Place in 2016. A stretch of I-494 closes over the weekend, and watch out for buckling roads. William Lager/MPR News

As the weather heats up across Minnesota, buckling roads may add to the headaches of road closures this weekend.

State Department of Transportation officials in south-central Minnesota are urging drivers to be on the lookout for pavement buckling this weekend. That’s when pavement heats and expands — and with nowhere else to go, buckles upward.

Highs are forecast to reach the mid- to upper-80s on Saturday, and perhaps tip into the 90s on Sunday, when the heat index may climb to near 100 degrees.

Meanwhile, there’s one major freeway closure scheduled in the Twin Cities for the weekend.

A stretch of Interstate 494 in the west metro — between Interstate 394 in Minnetonka and the Interstate 94/Interstate 694 split in Maple Grove — will close from 10 p.m. Friday to 5 a.m. Monday. The closure will let crews in Plymouth demolish the aging Rockford Road bridge across the freeway.

Traffic from I-494 will be detoured onto U.S. Highway 169 during the closure.

In the east metro this weekend, there will be some nighttime ramp closures and detours at the I-94/I-494/I-694 interchange in Oakdale and Woodbury.

Lane closures will continue along I-494 in Inver Grove Heights and South St. Paul. Starting Monday, the ramps between I-94 and U.S. Highway 52 will be closed from 7 p.m. to 5 a.m. each night through mid-August as crews complete resurfacing and other work.

Elsewhere in the state:

• Minnesota Highway 210 remains closed between Brainerd and Ironton through October, with traffic detoured via state highways 25, 18 and 6.

• Traffic continues to be reduced to a single lane in each direction on I-35 near Rush City, I-90 near Albert Lea and Fairmont, and I-94 near Alexandria.