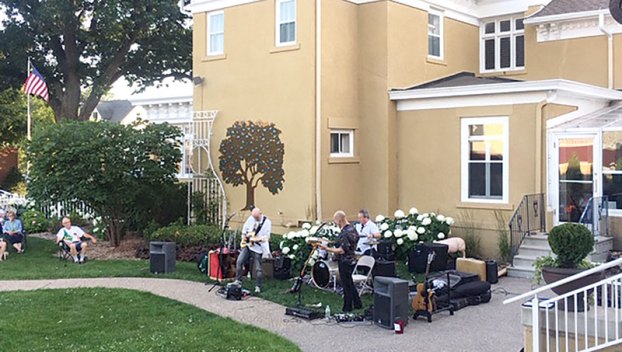 Lehto and Wright perform during Music @ the Mansion. Photo provided

Hormel Home is a place for music

2019 marks the 10th season of music programming at the Hormel Historic Home. Music was important to the Hormel family as a form of entertainment, enrichment, and for some, employment throughout the last 100 years.

George Hormel wrote of how music was a source of enjoyment in his childhood. He recalled how children would gather together in his Toledo neighborhood to form an impromptu fife and drum corps inspired by Civil War stories. Later, he married a music teacher who made her mark around Austin on the organ and piano with civic and church organizations. And his son, Jay, sang as a youth, and later formed the Hormel Girls Drum and Bugle Corps of American Legion Post 570.

Jay’s sons explored their own musical talents throughout their lives. Geordie recorded and produced music, eventually starting the Village music studio in Los Angeles in 1968. Geordie would have been 91 years old on July 17, and his music legacy continues to be well regarded. Thomas composed a wide array of jazz, Caribbean, and big band pieces that have been performed all over the world. Jim, a beautiful pianist, has shared his musical gift on the HHH piano and recorded a CD with his son and other family members, which we have been playing in the historic home daily. The children and grandchildren of Geordie, Tom and Jim continue to have an impact on the musical landscape today.

George Hormel’s great-niece, MarySue Hormel Harris, is a retired piano teacher and accomplished performer. I mention her frequently, but we can’t offer her enough recognition for supporting the rich music programming that has developed over the last ten years at the HHH. Through her generosity we have been able to bring 61 concerts to the Peace Garden or inside the Carriage Hall Event Center.

We have hosted seven Harris music contests for area youth, and have offered 11 workshops exposing a wide age range of people to different music styles and techniques. Over 5,000 people have been welcomed into the various parts of the Hormel Historic Home to appreciate and learn about music.

Music has been happening in the Hormel family for more than a century, and in the 10 years since the Carriage Hall event center addition, the community of Austin has been able to share in their love of music through numerous events.

Our music season continues through August and then we’ll have a grand finale on Sunday, Sept. 8, featuring Mac & Reino, JCA, and Sena Ehrhardt & Cole Allen Acoustic. Mark your calendars.

Joey Leone and his band take an in-depth yet lighthearted look at the songs that came out of our AM radios during the golden age of rock and roll. Free

The Austin Bruins took care of one of their last offseason routines in preparation for their 10th season in Riverside... read more