Herman Hugo Frank, 90, of Dexter, Minnesota, passed away peacefully on Monday, July 1, 2019, at the Waters-Marsh Memory Care in Rochester, Minnesota. 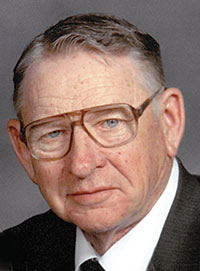 Herman was born April 10, 1929, in Elk Grove, Illinois, to Herman and Clara (Dahm) Frank. He grew up in the West Chicago area and worked on the family farm until age 24. Herman served his country in the United States Army. He married Helen Margery Plummer on Feb. 10, 1954, in Aurora, Illinois, while in basic training. After his honorable discharge in May of 1955, Herman farmed alongside his brother Dave in Marengo, Illinois, until 1974, when he and his family moved to Dexter, where he continued to farm. He was a member of the Holy Cross Lutheran Church in Austin, Minnesota. Herman was self-taught in a lot of areas, including construction and mechanics. He enjoyed traveling to visit relatives. Herman was well loved and will be dearly missed by all who knew him.

Funeral services will be held at 11 a.m. on Saturday, July 6, 2019, at Holy Cross Lutheran Church in Austin. Visitation will be held for two hours prior to the service on Saturday at the church. Interment will be in Dexter Cemetery with military honors by American Legion Post 91 and VFW Post 1216. Memorials can be directed to Lutheran Hour Ministry or recipient of donor’s choice. The family would like to thank the Waters Care staff and Primrose staff in Austin for the wonderful care they gave to Herman. Services are pending with Worlein Funeral Home of Austin. Condolences may be expressed to the family online at www.worlein.com.

Aniceta Lillian (Durben) Overocker, 93, of Austin, Minnesota, passed away on Saturday, June 29, 2019, at her home surrounded by... read more