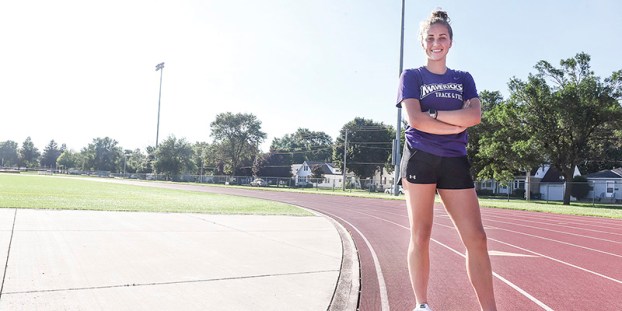 Austin grad Caroline Hackel stands on the track where it all started. She recently wrapped up her track career with an appearance at the NCAA Division II National Track Meet. Eric Johnson/photodesk@austindailyherald.com

Finding her stride: Hackel finishes on a high note

Austin grad Carolyn Hackel had a lot of success during her days as a Packer, but injuries often kept her from performing her best against the best.

Hackel, who graduated from Austin High School in 2015, finally caught the break she was looking for when she wrapped up her college track and field career in the biggest meet she could hope to reach.

Hackel, who dabbled in sprints, throws and the heptathlon in her three years of competing at Minnesota State University in Mankato, found her groove in the hurdles this past spring as she finished with a time of 14.36 seconds to take 16th place in the 100-meter hurdles in the NCAA Division II Championships in Kingsville, Texas this past May. Hackel has one more year of eligibility to run track, but she doesn’t plan on competing as she looks to either enter grad school or find a job.

“It was super awesome to be at my best in the best meet. I went as far as I could go for my last race,” Hackel said. “(Getting to nationals) was the goal. Being on such a successful team and seeing all of my friends and teammates qualify for nationals for nationals. It’s something I wanted to do. It’s the highest level of competition that a college athlete can achieve.”

Hackel was a six-time state qualifier in gymnastics and she competed in three state track and field meets with the Packers. She was often slowed down by injuries and she completely missed out on state her senior year with Austin.

Hackel also never cleared a single hurdle in her time in high school as she went to state twice as a sprinter and once as a long jumper.

When she arrived at MSU, the coaches saw Hackel’s athleticism and they put her in the heptathlon, which forced her to learn how to jump hurdles and throw javelin. It wasn’t until Hackel met former MSU hurdler Brooke Foreman, who took 16th in the 60-meter hurdles in nationals in 2016, that she started to warm up to the event.

“On my first day of hurdles, I hated it. A week or two in, I started clicking,” Hackel said. “When I met with Brooke Foreman, she worked with me and that helped a lot. I only focused on hurdles this year and that gave me a boost.”

Hackel is glad she took on sports on college and she said that being a three-sport athlete in high school also helped prepare her for being successful in life.

“Mentally, it really disciplined me. It forced me to be organized, not just athletically, but with my thoughts and my perspectives,” Hackel said. “I’m just ready for the next phase of my life. I’m glad I competed in track, because I’m so competitive and I get that from my dad (Tim Hackel). It would’ve killed to me be on campus and not been competing.”

State football is coming to Austin

Austin is no stranger to big tournaments and Art Hass Stadium is now set to join the lineup of tournament... read more