Erv was born on July 13, 1935, in Brownsdale, Minnesota, to Ervin and Marie (Johnson) Kirchner. He was the oldest of four children. His siblings include Les Kirchner of Fort Collins, Colorado, Carol McClanan of Edmond, Oklahoma, and Gary (Julie) Kirchner of Plymouth, Minnesota. Erv graduated from Austin High School in 1954 and enlisted in the U.S. Army, where he served as a SP2. He spent most of his active duty in Mannheim, Germany. During his service, in post-war Germany, he met and married Ruth Schneider on July 1,1957. After his military career, the couple moved to Austin, Minnesota. They had two children, Dave and Tom. Erv worked as a salesman for a number of companies until his retirement in 2015 at the age of 79. 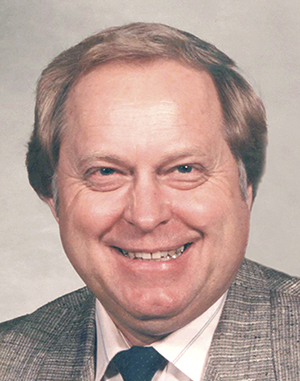 Erv married Betty Schlee on Aug. 22, 1986, in Austin. They moved to Knoxville, Tennessee, for two years to follow Erv’s career. Upon their return to Minnesota, they moved to the Twin Cities area to be near their children.

Erv’s favorite past times were talking, spending time at the casinos and enjoying meals with family and friends. His faithful Honda Accord kept them on the road, logging over 600,000 miles. He proudly negotiated four transmissions on that car!

A Mass of Catholic burial will be celebrated at 11 a.m. on Monday, July 15, 2019, at Pax Christi Catholic Community in Eden Prairie, Minnesota. Visitation will be held two hours prior to the service on Monday at the church. In lieu of flowers, memorials can be made to the Minneapolis Veteran’s Hospital in honor of Ervin E. Kirchner, mail to Voluntary Services (135), VA Medical Center, One Veteran’s Drive, Minneapolis, MN 55417, designate: Hospice Unit 1D. A private burial will be held at a later date at Fort Snelling.