Donald LeVoy Johnson, 89, was welcomed into Heaven on July 13, 2019, at Mayo Clinic Health System-Austin surrounded by his loving family. 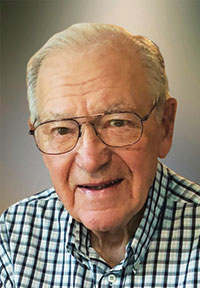 Don was a dedicated family man and beloved friend to many. He never let even the hardest of days defeat his witty sense of humor and love for storytelling. He was a man who persevered, loved hard and lived life to the fullest. His memory will be cherished always.

Don was born May 18, 1930, in Austin, Minnesota, to Melvin and Anna (Johnson) Johnson. He was a 1948 graduate of Austin High School and a graduate of Austin Vo-Tech. On April 23, 1953, he was united in marriage to Patty Lewis in Las Vegas, Nevada. Don and Patty shared 66 happy and loving years together. Don served his country in the U.S. Navy during the Korean War as a gun fire control technician on the USS Rupertus. He was a 43-year employee at Hormel Foods Corporation, beginning his career at the Austin plant in 1948 and retiring from the corporate office in 1991.  Don was a member of St. Olaf Lutheran Church and an active member of the St. Olaf Men’s Club. He was an avid trap shooter at Cedar Valley Conservation Club and shot sporting clays at Pheasant Links. He had a great love for the outdoors and enjoyed many hunting and fishing trips. He faithfully cheered on the Minnesota Twins and Vikings.

A celebration of life will be held at 2 p.m. on Thursday, July 18, 2019, at St. Olaf Lutheran Church in Austin. Visitation will be held from 4-7 p.m. on Wednesday, July 17, 2019, at Mayer Funeral Home and will continue for one hour prior to the service on Thursday at the church. Interment will be held privately at the Minnesota State Veteran Cemetery in Preston, Minnesota, with full military rites. Memorials are preferred to the Cedar Valley Conservation Club or the donor’s organization of choice. Condolences may be left online at www.mayerfh.com.