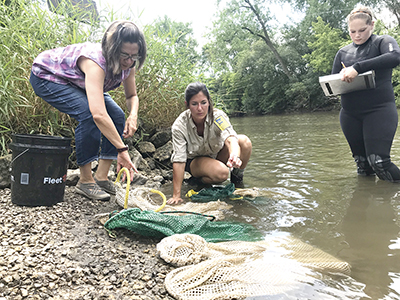 On Thursday, a Minnesota Department of Natural Resources crew went to three sites on the Cedar River State Water Trail in Mower County to reintroduce black sandshell mussels they had been growing in cages since May 2017 in Austin’s East Side Lake, part of the Cedar tributary Dobbins Creek.

DNR staff removed mussels Tuesday from the northwest corner of East Side Lake, tagged each one on Wednesday at their Lake City office and placed them in the Cedar River today, with each site getting about 490 mussels.

The crew’s first site was near the DNR canoe-kayak access behind Austin’s Marcusen Park baseball stadium. The other two were south of the city in Austin and Lyle townships.

Relocation sites were chosen below Austin’s downtown dam to better enable the spread of black sandshell mussels along nearly 21 river miles of the Cedar River from that point to the next dam in Otranto, Iowa, a few miles south of the border.

Madeline Pletta, a mussel propagation biologist with the DNR’s Ecological and Water Resources division, has led the Cedar River mussels project, which launched in 2016.

“We have been very pleased with the black sandshell mussels’ growth through this project and are optimistic that they will thrive in the Cedar River and its tributaries, providing numerous benefits,” Pletta said in a press release issued by the Mower Soil & Water Conservation District.

Austin was known in the 1890s and early 1900s as “Pearl City” for its abundance of freshwater mussels, which became over-harvested for making buttons and jewelry as well as searching for the rare pearls found in some. Austin even once had a button-making factory connected to the local mussel population.

Reintroducing these mussels into historically occupied habitats from which they were removed or destroyed is a logical step toward improving their status in Minnesota as well as in Iowa, Pletta said. This effort also is likely to succeed today, she said, because water-quality improvements should allow them to become reestablished in the Cedar River’s Minnesota portion. 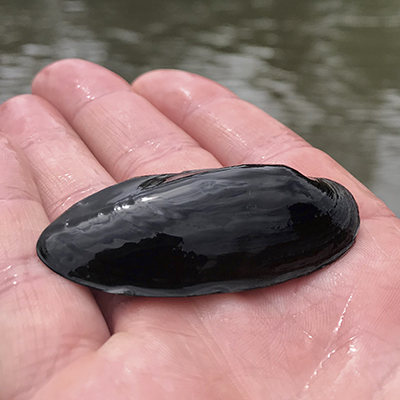 One of nearly 1,500 black sandshell mussels reintroduced Thursday to the Cedar River in Minnesota. Photo provided

All mussels released in the Cedar River reintroduction sites have been marked with a numbered tag or another marking to distinguish them from any naturally recruited individuals and to assist with monitoring their growth and survival. Mussels’ reproductive strategy mainly involves using fish as hosts for their larval stage, allowing mussels to disperse wherever their host fish lives or swims to in a lake or river.

Freshwater mussels are important components of aquatic ecosystems by providing critical ecological services, such as providing structural habitat for other aquatic invertebrates, and food for fish, birds and mammals.

Freshwater mussels occur throughout the world. Unfortunately, within the last 100 years mussel communities have declined in abundance and diversity due to dam construction, stream channelization, water pollution and sedimentation, over harvesting and the recent introduction in some waterways of the exotic zebra mussel.

Mussels are identified as the most-imperiled group of animals in North America. In Minnesota, 28 of the state’s 50 species now are listed as either extirpated (destroyed), endangered, threatened or of special concern.

DNR surveys have revealed that rivers in Minnesota’s southern one-third no longer support their historical assemblages of mussel species. Black sandshells, for example, only were found in the form of dead shells in the Cedar River in Minnesota and its tributaries.

Notable exceptions in the survey, however, exist in the Cedar River Watershed with Otter and Rose creeks – tributaries of the Cedar River in Mower County. In Otter Creek, located east of Lyle, the DNR found 11 mussel species and, unlike most of the other streams surveyed, Otter seemed to support its historical complement of mussel species based on a lack of empty shells.

DNR’s Center for Aquatic Mollusk Programs (CAMP), based in Lake City along the Mississippi River, has been working to restore historic mussel species aggregations or clusters in the Cedar River and other select rivers and streams in Minnesota. CAMP biologists seek to reestablish mussel populations to delist state endangered and threatened species while engaging and informing the public about the importance of aquatic ecosystems and the unique role mussels play in benefiting people.

Deann Ruth (Wangen) Poorman, 72, of Austin, Minnesota, passed away peacefully surrounded by family at home after a short but... read more