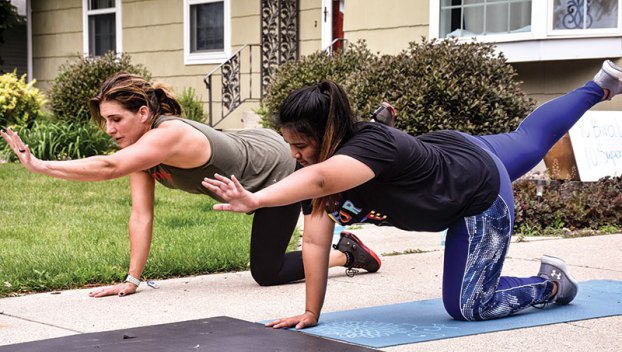 Left to right: Danielle Nesvold helps Andrea De Ausen with her form during a group work out session for 10 St. Muscle held outside of Nesvold’s home. Photos by Hannah Yang/hannah.yang@austindailyherald.com

Building confidence: Neighborhood kids build up muscle and each other

Underneath the summer sun, some Austin kids were already hard at work getting into shape.

A group of about 10 kids from around a southwest Austin neighborhood were exercising out in front of Danielle Nesvold’s yard. Music blasted through speakers, and Nesvold was motivating each child to push themselves in achieving their fitness goals. For about 30 to 40 minutes, some do planks, burpees or run and up down the street.

Each person was at a different level of fitness, and they were all there to support each other. By having a smaller intimate setting for exercise, there’s less of a chance of feeling intimidated by those who have been working out longer.

“You have to treat each child as an individual,” Nesvold said. “We try to keep a positive mindset. Your attitude can affect the group, and they will work as hard as you do.” 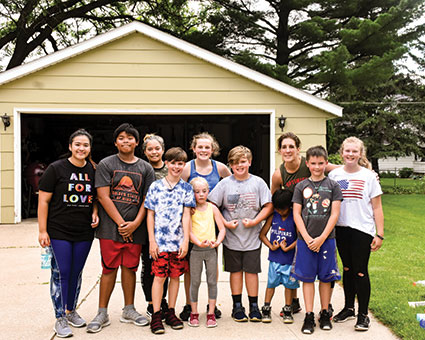 A group of neighborhood kids call their fitness group 10 St. Muscle. Every Monday, Wednesday and Saturday, the children gather at Danielle Nesvold’s house and work out together. Hannah Yang/hannah.yang@austindailyherald.com

This fitness group started last month and has grown among the neighborhood kids. It started with Nesvold working out in the garage to work on self-discipline and exercise because of her work as a fitness instructor at the YMCA. While juggling work and caring for her children, she needed a place to continue working on her exercise.

“Some of the kids were curious as to what I was doing and then joined me,” Nesvold said. “I decided that it was important for me to focus on working out with them so they didn’t get hurt.”

So each Monday, Wednesday and Saturday, Nesvold sees an average of eight kids attending each session. She also hosts a “More Than Pink” fitness class on Thursdays. The commitment shown by the group of children who show up for their workouts inspired Nesvold.

“We talk about ‘gymtimidation’ and how positivity affects others in a group,” she said. “The kids took the initiative in running this and work hard. They love the burn. If they didn’t request these classes, then I wouldn’t be doing them. This is completely run by them.” 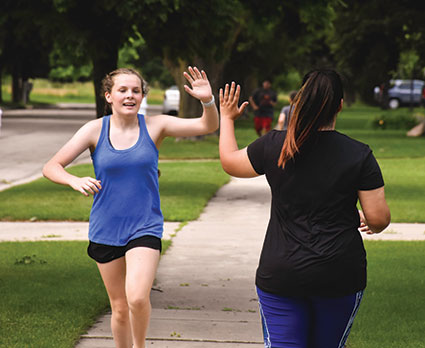 The popularity of the group reached parents, and they supported Nesvold’s classes by sometimes attending workout sessions with their child, or simply saying hello and dropping off sports drinks to help everyone hydrate after a class.

Vaness Connett, Nesvold’s neighbor, has three of her sons work out with Nesvold during the week. Finding options that fit their schedule and are closer in proximity to their home made finding time for exercise programs more accessible for the families in the neighborhood.

“I love it,” Connett said. “My kids get all their energy out in a positive way. They love it and really enjoy it. It’s been fun and gives them something to do during the summer.”

Sometimes working out together motivates those who weren’t interested in exercise to give it a try. That was the case for Andrea De Ausen, 15, who saw kids gathering on the Nesvolds’ yard and doing different fitness routines. Seeing her friends made De Ausen want to give the group a try. She has been attending sessions with a fitness goal of losing 25 pounds by the end of summer. 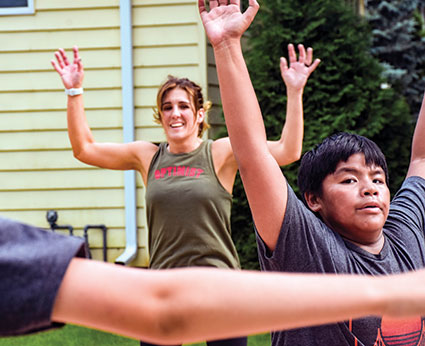 Danielle Nesvold leads an exercise class called 10 St. Muscle at her home in southwest Austin. She hosts neighborhood kids every Monday, Wednesday and Saturday for exercise work out routines.

“It’s fun to exercise with them,” De Ausen said. “It’s better than being at home. Since my friends are working out here, it’s fun to be with them. I’m trying to push through.”

The fun was immense enough that T-shirts were being designed to name their little group “10 St. Muscle,” in reference to the street where the kids meet to work out. As to whether the group will continue every summer, Nesvold foresees continuing with workouts as long as there are kids who are still interested in putting in the hard work.

“We’ll keep doing it,” she said. “I enjoy it, and the kids challenge each other. Some are natural motivators. It really helps them confidence wise.”