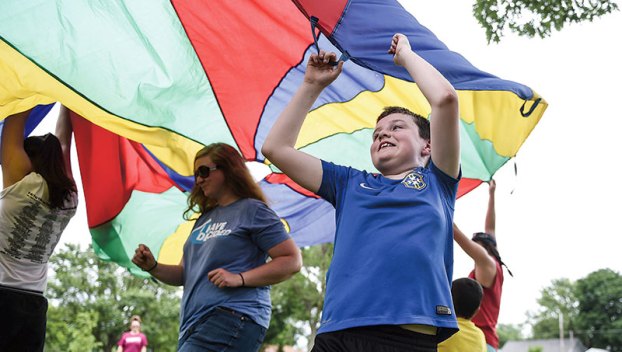 Aaron Rockwell, 11, pulls down a portion of a parachute while taking part in Rolling Rec Friday afternoon at Wildwood Park. Photos by Eric Johnson/photodesk@austindailyherald.com

A new program from the Austin Park and Recreation Department made its debut on Friday afternoon at Wildwood Park.

Austin kids enjoyed a variety of activities, from football to soccer, tug-of-war to beanbags. All games and equipment came courtesy of Austin’s new Rolling Rec van.

“I was able to get the van and we have a whole bunch of recreation stuff in the basement, so we figured we could tow it all to one spot and bring it out to the parks,” said Recreational Supervisor Riley Donovan. 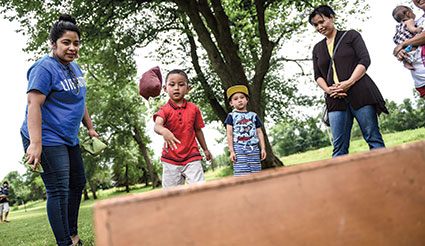 Eric Mee, 4, hurls a beanbag during some summer fun.

The idea came from similar programs in other communities. Donovan said the goal is to bring recreation out into the community.

“I’d like to bring it to spots where we don’t normally have any recreation,” he said. “We hope to come to parks that people don’t know about and get them out of their houses and get kids moving around. Nobody really knows (about Wildwood Park) and we want to get people out to discover new parks, plus there are a lot of day cares in the area.”

Donovan aims to expand the program and hear from kids about what activities they would like to see from Rolling Rec. The goal is to bring the Rolling Rec to a different location from 2-4 p.m. every Friday,  though there will not be any activities this Friday due to the Fourth of July holiday.

Kids and their familes turned out Friday to Wildwood Park for the first day of Rolling Rec, a program by the Parks and Recreation Department.

The Park and Recreation Department is hoping to offer it year round.

“We could do some winter things at the dome or maybe the arenas,” Donovan said. “You never know.”

A Rolling Rec schedule is in development, Donovan said. Those interested in finding out where it will go can check the Austin Park and Recreation Facebook page at https://www.facebook.com/Austin-Park-Recreation-Department-157487377635167/. 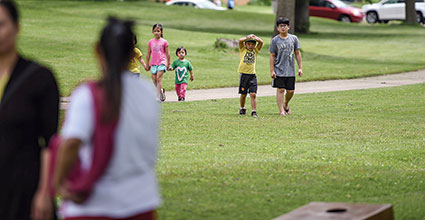 Storm systems traveling through the region have caused some problems for Mower County residents over the weekend. In Lyle, severe... read more