Robert Jordan Olson, 28, of Austin was charged with second-degree assault with a dangerous weapon, terroristic threats and domestic assault, all felonies, on Wednesday in Mower County District Court. 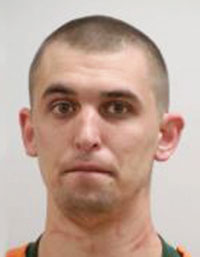 According to the court complaint, police were dispatched at about 10:45 a.m. on Tuesday to an apartment in the 200 block of 31st Street Southwest after receiving a 911 hang-up call. Officers made contact with Olson and a woman who was crying and holding a child. The woman told police Olson had thrown her “all over the apartment.”

The victim said she was cleaning the bathroom when the child crawled into the area she was cleaning. She told Olson to wash the child’s hands, which made him angry. She closed the bathroom door when he started yelling, but he burst through the door. She said she tried to close the door again, but his foot was in the way. He then “freaked out” and grabbed her face, scratching her face and neck, she said.

The victim then told police Olson dragged her into the living room by her shirt and told her to leave the apartment, but “would flip out” and locked the door when she tried. She alleged he kept screaming, then threw her onto the couch, causing her to strike her head. She also said he threatened her with a baseball bat and told her if she did not stop yelling for help, “he’d (expletive) kill me.”

Olson told police he and the victim had a fight and that he called her “some pretty rotten names.” He said she was screaming at him and that she called 911 and hung up. He also said he answered the phone when dispatch called back. He denied that a physical altercation took place, saying she pushed him when he got in her face yelling.

A review of Olson’s criminal record shows prior convictions for domestic assault, theft and drug sales.

Olson will appear in court again on July 15.