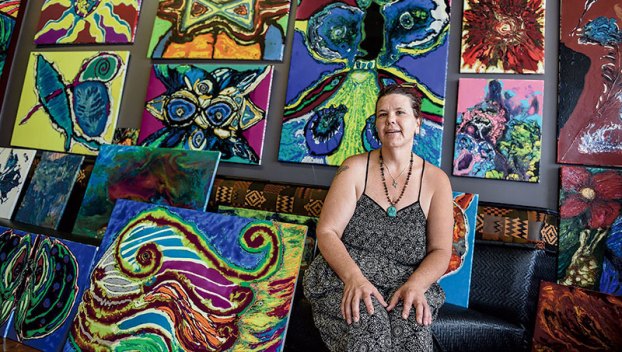 Michelle Gabbard is the owner of Still Wet Intuitive Art, located in downtown Austin. Michelle wants to use positive ways for people to relate to art. Photos by Eric Johnson/photodesk@austindailyherald.com

When Michelle Gabbard of Austin struggled with gambling, she needed to find another way to cope with her addiction. She ended up putting her habit to rest, and instead picked up some paint.

After running out of space inside her home, Gabbard decided to start searching for a studio so that she could expand her creativity. She stumbled across a storefront at 124 3rd Ave. NW and decided it would become a place where she could expand her art, which is now aptly named Still Wet Intuitive Art.

The studio has been open since Fourth of July. Visitors popped in during the day from Tuesdays through Saturdays from 11 a.m. to 7 p.m. Inside the studio, around 150 paintings hang on the walls in vibrant colors. Another 100 paintings are kept in the backroom and also at Gabbard’s home. Each painting is abstract. According to Gabbard, 99 percent of her artwork glows in the dark and can be seen with a blacklight and is painted with a tongue depressor.

“I paint at night,” she said while pointing to several examples of her work. “I paint barefoot in the grass and under the moonlight so that I can see what I’m doing. A lot of things that come out are my emotions, or my subconscious. There was a lot of anxiety before this.” 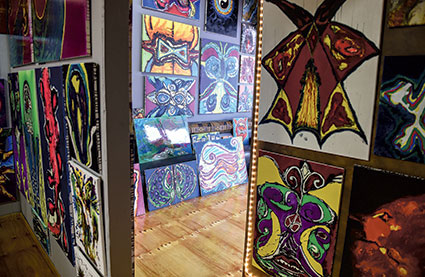 Gabbard worked as a travel nurse, a spiritual minister, and has extensive knowledge about massage, quantum healing, crystal healing and aromatherapy. However, she never thought about art as a potential business until Gabbard used art as an escape and to heal from a past traumatic experience of an abusive relationship.

Art was a gateway for her as she initially sought gambling as a way to cope with the stresses of being in a dangerous situation. Then, she eventually stumbled upon her creative side. This all happened only two years ago.

“I never thought about art, nor did I have an interest in it,” Gabbard said. “But, I found that art is very therapeutic.”

Sometimes a piece could take about five to six hours, other times it may even be as short as two minutes. Gabbard usually just paints until she feels her work is complete. Running through the various paintings are similar motifs and symbols such as birds and dogs. She used to pour resin for her artwork, but lately has drifted into other materials to create her artwork.

Yet, each piece has a special meaning for Gabbard, and she blessed each work through reiki, which is a type of alternative medicine called energy healing. It’s a technique based on the principle that the therapist can channel energy into the patient through touch and activate the natural healing process of the patient’s body and restore their physical and emotional well-being.

She would bless the pieces in hopes that those who purchase them would be healed of whatever they’re struggling with and that they are filled with positive energy.

“Art is a spiritual journey,” Gabbard said. “Doing these paintings will help people heal with art. Each person has something different and they talk about their own issues. Art has helped to see other points of view.” 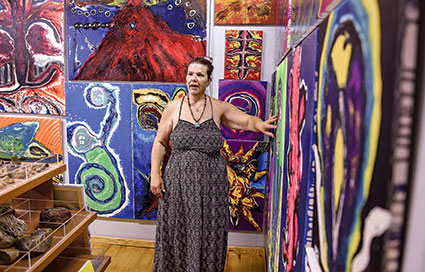 Michelle Gabbard talks about one of her paintings at her new studio downtown in Austin, Still Wet Intuitive Art.
Eric Johnson/photodesk@austindailyherald.com

Aside from selling her artwork, Gabbard eventually plans to host group and individual painting sessions for those interested in coming and learning how to create their own masterpieces from 7 to 9 p.m. Those who come will be painting in the backroom and spending up to two hours painting whatever inspiration strikes them. She’s expecting adults to pay $50 for their session, and students receive a discount of $30, with the intention of possibly hosting an after-school art class for teens around the town to find something to do.

Gabbard stated that those who have younger children can visit, but with a parent or guardian to escort them around the shop. She also hoped to bring painting sessions to local hospitals and nursing homes so that more people can experience art therapy.

The point is to paint with their emotions and to use art as a way to decompress stress, as well as learning how to cope with other stressors in their life such as work, relationships and more, Gabbard said.

“Art was my therapy,” she said. “I’m hoping to teach others a new coping skill, and just have fun doing it. I think Austin needed a new outlet for having fun and discover new ways to cope and how to proceed, as well as having a new perspective on life.”

She also plans to have aromatherapy as well as possibly having a friend come in to provide psychic/intuitive counseling to those who need to try something else. Gabbard plans to have tarot card readings and, for the first couple months, plans to just happily do people’s readings for free. She also sells healing crystals as well as small sets of various tarot cards.

Acknowledging that not everyone will initially understand her way of approaching therapy, Gabbard says that art is versatile and has the ability to heal those around the community who need something else to help mend their soul.

“You really need to make time for yourself,” she said. “Art gives you a sense of direction. Maybe even more awareness of different perspectives. It helps quiet the mind and you can let go of your fear.”

A journey for leadership: Hinkley shares experiences from SkillsUSA

When Avery Hinkley was a student at Austin High School, she never really thought herself to be leadership material. Yet,... read more