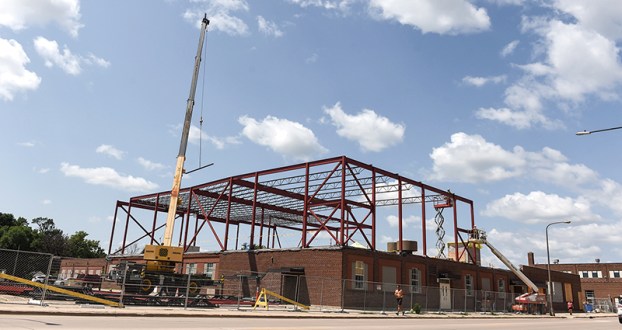 The frame of the second floor addition to the Austin High School annex is taking shape with construction slated to be finished sometime later this fall. Photos by Eric Johnson/photodesk@austindailyherald.com

Annex on track; MacPhail project continues progress, choir room anticipated to be completed by the start of school year

The $14.5 million MacPhail project has been undergoing some major progress during the summer. Despite severe weather impacting much of southeast Minnesota during the last month, the construction inside the new choir room is still expected to be finished before the start of school this fall, according to Superintendent David Krenz. Then, work will start on the second level of the annex, which will house the new band and orchestra rooms.

“It’s moving ahead really well,” Krenz said. “We did get a little behind because of the delay of steel getting delivered. However, the crews have been really moving despite the two-week delay. The choir room should be pretty close to being done close to start of school.” 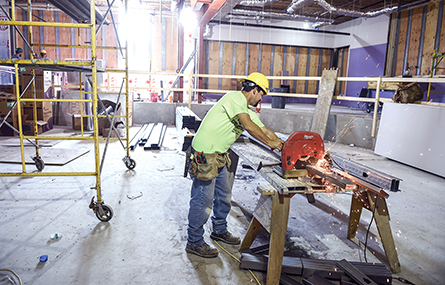 Sparks fly as a construction work cuts in the middle of what will be the new Austin High School choir room in the school’s annex.

The renovation project adds about 17,850 square feet to the existing facility. Inside on Thursday, construction crews were hard at work cutting through metal, sawing through wood and drilling supports.

The smell of fresh concrete and plaster wafted through the spaces of the first floor of the music annex. Krenz toured the facility on Thursday afternoon and stepped into what will become the new choir room. Contractors were busy sawing through metal, sending a cascade of sparks upward. There was the makings of a pit-like area in the center, where risers will eventually be installed.

All the efforts being done in the construction contributes to creating more volume for the choir room. Music directors for the band, orchestra and choir programs were significantly involved in the design and planning process of what their spaces needed in the remodel, Krenz said. Architects suggested digging a hole in the center of the room to create more volume for acoustics.

“It’s been really exciting for the directors,” he said. “They’ve been involved in the design phase since day one. They just met last week or two weeks ago finalizing the equipment and stuff that needs to go into the space. They really are excited for a larger area.” 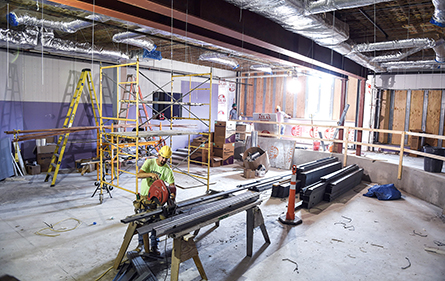 Near the back of the choir room was a passage that leads into a back room where choir robes and other materials will be stored for the choir program. A large glass window gives a glimpse of what will be the choir director’s new office.

Outside of the choir room, an elevator shaft was being created so that the second floor will be handicap accessible for individuals needing access to the upper level of the annex.

The music annex was built sometime in the 40s, according to Krenz. Since then, the building hasn’t had any major renovations done to it, aside from  minor maintenance work such as painting and redoing the roof. Interestingly enough, Krenz stated that the building was originally built in a way that if the school district decided to expand, a second level could be supported on top of the music annex.

“It actually saved us quite a bit of money with that,” Krenz said. “People were initially uncertain that it was built that way, but sure enough, the old building plans and designs confirmed that a second floor could be built.”

The new area was in stark contrast to the choir room that was currently being used by the choir program downstairs of the music annex, where there was not enough volume for there to be enough acoustics. That room will instead be turned into storage.

“It’s really rewarding seeing all the fruits of your planning and the collaboration that goes into making a project happen,” Krenz  said. “It’s unbelievable that just the idea that came up for our choir room that needed music spaces and volumes that we didn’t have in our current spaces.” 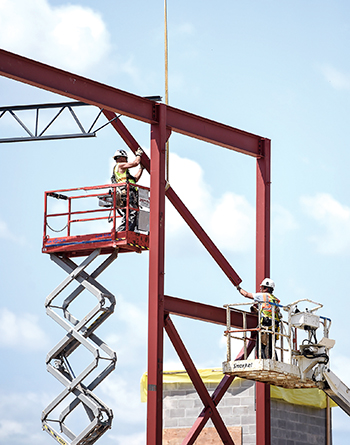 A pair of construction workers guide a beam into place on the new second floor of the Austin High School annex Tuesday afternoon.

Steel supports have already been installed onto the roof of the music annex, indicating phase two of the MacPhail project would be starting fairly soon.

All the steel supports were being installed during the summer when school was not in session so that the noise from construction would not disrupt classes. Summer rehearsals have been moved to Ellis for the time being. The new addition will add 13,750 square feet toward the east half of the property that faces Fourth Street Northwest.

Although the band and orchestra will continue using their current spaces, they’ll move into their new rooms on the second floor hopefully sometime in January or February 2020, Krenz said.

Once the renovations are finished and the upper addition completed, then the former orchestra and band rooms will be gutted to create the MacPhail Center for Music, where there will be a learning area, a common area and new practice rooms that will become a shared space with AHS. That final phase of the project should be finished by summer 2020.

Seeing this much progress only within several months was exciting to Krenz and all those who were involved. The fruits of their labor will be physically representative of the ongoing partnership between MacPhail Center for Music and Austin Public Schools.

“The partnership wouldn’t be happening without the support of The Hormel Foundation,” Krenz said. “That support from MacPhail and the school district showed the willingness to take our music programs to the next level.”