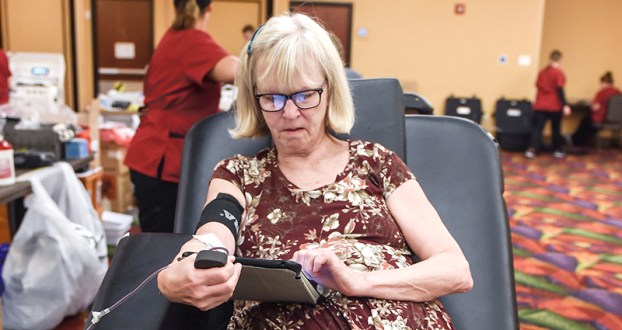 A memory and a need: Annual blood drive honors the memory of Lauren Schwab while filling a need 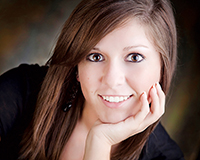 It’s been just over six years since Lauren Schwab died in 2013, but her presence is still felt.

Monday and Tuesday of this week, the seventh annual Lauren Schwab Memorial Blood Drive was held at the Holiday Inn Convention Center with the express purpose of not only holding a blood drive to help the American Red Cross, but to also remember the soul of a young lady determined to help others through a cause she believed in.

“She knew the drive saved lives and there is always a need for (blood) in the community,” said Lauren’s mom, Beth Schwab. “It was just near and dear to her. She was really big on community service.”

The drive is a continuation of something Lauren helped get off the ground when she was in high school and a part of Austin High School’s Youth Leadership. During her time, Lauren was instrumental on a state level in getting the age for blood donation dropped to 16 with parent permission.

To this day, Youth Leadership has continued the drive and despite not knowing Lauren, many of the Austin High School students involved in the organization have gotten to know Lauren through it.

“It’s because the Schwab family has done a lot for the high school,” explained AHS senior and co-leader of Youth Leadership Carly Snee. “We have learned a lot about Lauren and we’ve wanted to keep it going.”

The blood drive is also a way to continue getting those involved in Youth Leadership working in their community.

“They are opportunities I can play a role in,” said Lilly Reynen, another co-leader.

The group’s third co-leader Salma Masood agreed, “It gives me more of an opportunity to be active in the community.”

The American Red Cross holds a number of blood drives nationally throughout the year, including several in Mower, Dodge and Steele counties.

With the need for donated blood always at the forefront of these drives, members of the organization are inspired by the work of younger citizens pushing action to meet these needs.

American Red Cross Team Leader Peter Garcia is one of those that counts himself an admirer of drives like the Lauren Schwab Memorial Blood Drive.

“It’s a beautiful thing,” Garcia said. “It’s a community effort, other than us coming in. It’s a big part of what we do.” 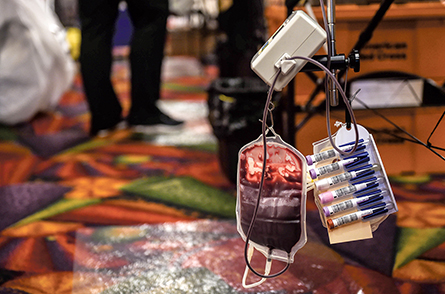 Blood drains into a bag during the Lauren Schwab Memorial Blood Drive Wednesday at the Holiday Inn Convention Center.

As the Red Cross continues to meet blood needs around the country, Red Cross communications manager Sue Thesenga said not only are the drives an important step in meeting that need, but it also opens the door for community involvement for younger adults and teens.

As many donors who saw blood donation as their civic duty begin phasing out in terms of being able to give blood, those who are younger begin to be even more important in the process.

“It’s really important,” Thesenga emphasized. “The Red Cross is always looking for new and younger donors. It’s an opportunity to give back.”

Currently, the national supply of blood is down to a three-day supply, two days short of the five-day supply the Red Cross likes to have on hand.

“By putting out this emergency need, we’re urging donors to give,” Thesenga said. “Give now to avoid the delay of treatment patients may need this summer.”

Board approves resolution to support extension to Shooting Star Trail

The wheels are turning in support of a potential connection of an interstate bike trail between Minnesota and Iowa. During... read more