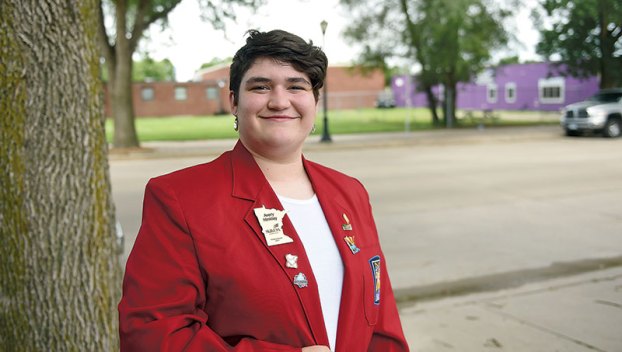 A journey for leadership: Hinkley shares experiences from SkillsUSA

When Avery Hinkley was a student at Austin High School, she never really thought herself to be leadership material. Yet, the 17-year-old found herself becoming a leader, thanks to her time spent in SkillsUSA.

Hinkley first heard of SkillsUSA when she attended an assembly at AHS last year. After contemplating whether the organization would be good to add on her college resume, she decided to take a chance.

“I had people push me to also try it out,” Hinkley said. “I thought, why not?”

SkillsUSA is a partnership of students, teachers and industries working together to make sure the country has a skilled workforce. Providing educational programs, SkillsUSA aims to help each student excel and support career and technical education in classrooms nationwide, according to the SkillsUSA website.

Within just her first year, Hinkley became president of her local chapter after her peers voted for her. She campaigned for a state officer position with SkillsUSA and eventually became parliamentarian. According to AHS SkillsUSA chapter advisor Craig Knippel, this was not an easy feat.

“AHS’ SkillsUSA has sent five students as national delegates,” Knippel said. “Austin High School has had four Minnesota state officers, including Avery. The metro area tends to lead in officers with higher student numbers and out-state really needs to have a solid campaign to be voted in as a state officer.”

Hinkley was in a whirlwind of intensive leadership training in Alexandria, Minnesota, for three days last October, all while maintaining good grades and working an after-school job at Runnings. She also competed in the Welding Sculpture competition in the Minnesota SkillsUSA Leadership and Skills Conference in Bloomington.

Knippel, shared that while working with Hinkley during her first year as a senior, he was immediately impressed with her willingness to learn more about what it means to be a leader.

“Avery excels at everything she does,” he said. “She outperforms her peers in maturity, respectfulness, and she has a kind demeanor that naturally draws people in. She is polite and goes out of her way to show her appreciation to others.”

Recently, Hinkley attended the SkillsUSA National Leadership and Skills Conference in Louisville, Kentucky. There, she met and interacted with fellow students from all over the United States. She learned how to collaborate with others, even though their personalities and ideals may clash every now and then.

Looking back on her journey, Hinkley found herself changing from a shy teen into a more outspoken and confident leader. She would never speak her mind until she stepped into room 546, where she connected with other SkillsUSA students at AHS, and meeting up with Knippel. She went from being quiet, to someone who was able to speak in front of 500 people at the national conference while doing a presentation.

“I wouldn’t have done any of this if those people hadn’t helped me get a lot of self-confidence,” she said. “I surprised  myself.”

Knippel shared that if there was a textbook example of who should be in SkillsUSA, it’d be Hinkley. To be successful in SkillsUSA, students needed “grit” as well as being punctual, solution driven, positive and respectful.

“Students with grit and the will to pitch-in makes a good SkillsUSA member,” he said. “Success builds success, and becoming a part of a group that has success is motivation. Students should work diligently in the national program of work, which includes: employment; community service; championships; social; professional development; ways and means; public relations. I tell my SkillsUSA members that you don’t push a piece of string, but you can pull a piece of string.”

During the national conference, Hinkley shared that she had a special teaching moment with another student. At the conference, students would trade and collect special pins that represented each state at the conference. Hinkley obtained a special type of pin that a fellow student really wanted.

“I decided to give her all my pins, including that one,” Hinkley said. “You have all these special moments where you can bond with team members and raise people up. The lesson I learned was that even though I lost pins, it was still worth it to make someone else’s day.”

Since graduating from AHS, Hinkley will be headed off to Riverland Community College-Albert Lea Campus to pursue the welding program. Ever since she started working on motorcycles with her father, Hinkley has been focused on building her skills and pursuing that as her career.

There, she also plans to continue on in SkillsUSA at the college level and plans to re-campaign for her state seat as well as continuing to build up others who are considering what it means to become a leader.

“You have to put yourself out there before doing great things,” Hinkley said. “Everybody should think about others before yourself.”

SAINT PAUL – The Minnesota State Arts Board has awarded an Operating Support grant totaling $43,553 to the Historic Paramount... read more