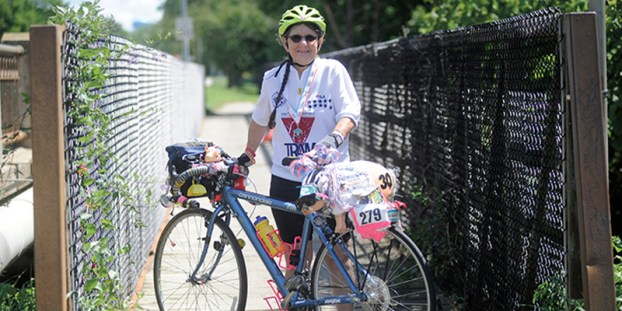 Mary Nelson, who has now rode at TRAM 30 years in a row, wears the jersey she wore the first time she particpated in the event in Austin this week. Rocky Hulne/sports@austindailyherald.com

Whenever Mary Nelson leans in and gives the stuffed pig that rides on her bicycle a kiss, she knows she’s put in some work for a good cause.

Nelson recently rode in The Ride Across Minnesota (TRAM) for Multiple Sclerosis for the 30th straight year as she trekked 260 miles in five days from Wilma to Ortonville and back. Nelson, who is 66 years old, dug out the original jersey she had on her first ride on the trip and she listened to her favorite band, the Moody Blues, through the entire trip as she does whenever she hits the road on her bike.

“It was exciting. People couldn’t believe that I’ve done it 30 years, but actually I can’t believe I did it 30 years either,” Nelson said. “It’s just rewarding. You get to hang out with your old friends, go to new towns and it’s an adventure.”

Nelson raised $1,000 for this year’s ride, which ended in her kissing her pig in smiling. While the trip can be a little grueling, Nelson embraces getting out for a great cause. She has also ridden the same Cannondale Touring Bike since 1992. 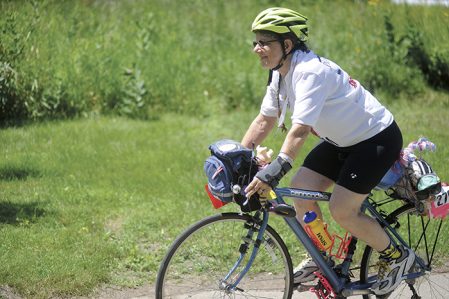 Mary Nelson rides through a trail in Austin this week. Rocky Hunle/sports@austindailyherald.com

“It’s still a real good bike. It does the job,” Nelson said. “When I get to the finish line I give the pig a kiss because we made it across for another year. I thank everybody that’s sponsored me. We’ve raised quite a bit of money and I’ve rode a lot of miles. A lot of people had to help me, or I wouldn’t have been here. I’m blessed to be out here and to be able to help other people.”

TRAM has taken Nelson to much of the state in Minnesota as she’s been to nearly every region besides the northwest part of the state. She has biked in weather that is so cold that she could see her breath, she roade through the rain and she’s had to tough it out in high heat and humidity.

She wouldn’t have it any other way.

“It’s the best way to see Minnesota. You see a lot more things from your bike than you do at 75 miles per hour down the freeway,” Nelson said. “The cities (on the tour) go above and beyond the call of duty. They make sure we have good food to eat and a lot of water.”

Nelson used to camp on the ride, but a few years ago she started staying in a hotels. She still tries to represent Austin with her colorful bike, which features SPAM gear and she tries to make the event as fun as possible for her fellow riders.

“It’s always fun to see everybody,” Nelson said. “A lot of people have done it for a lot years. It’s like a big family and it’s so rewarding.”

Nelson initially started riding in TRAM when Cindy Fuhrman of Austin had an aunt with MS and the two rode together.

Nelson thanked everyone who’s ever supported her over the years and she gave a nod to Rydjor Bike, which is where she bought her touring bike. She’s also thankful for all of the water towers she sees on the path.

“Whenever I’m biking, if I see a water tower, I know I’m getting close to something, whether it’s a tent or food,” Nelson said. “I’m always looking for a water tower.”