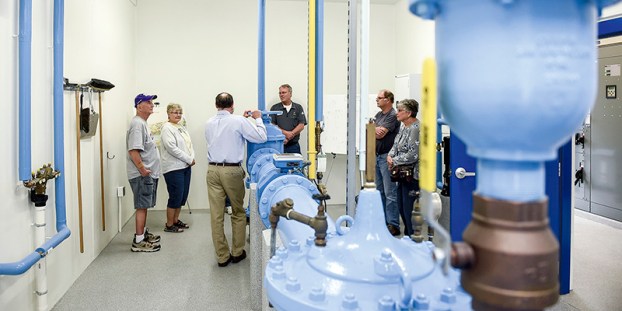 Many Austin residents have driven by Bel-Air Water Tower near Wescott Stadium and never given it much thought. That changed Friday when Austin Utilities opened up the gates for people to take a peek inside.

In collaboration with We Are Water MN, Austin Utilities opened up Well Station No. 9 and Bel-Air Water Tower for tours, which looked into showcasing how the agency distributes water for its customers and giving insight into what goes into providing clean drinking water for Austin.

“We Are Water MN” explores connections between the humanities and water through an exhibit, public events and educator resources.

Visitors also reflect on local stories and on the meaning and experiences of water in Minnesota with space to add their own stories that aims to promote water stewardship.

Tours took place every half hour, with small tour groups popping in to take a gander at the well station’s various mechanics as well as looking at the Bel-Air Water Tower, which carries one million gallons of water while Ellis Water Tower carries about 500,000 gallons.

Among those on tour was Leonard Germer, who was born and raised in Austin and had worked previously at a nuclear power plant. All his life, he never got a chance to see the water tower up close and see the mechanics of a well station.

“The first time I heard about the tower tours was in the newspaper,” Germer said. “I’ve always driven by this place and I’m excited to get to see how this works. Anytime the city has a chance, they should offer tours. It’s really interesting to see what they’re doing, and letting the public see things they don’t normally get to see.” 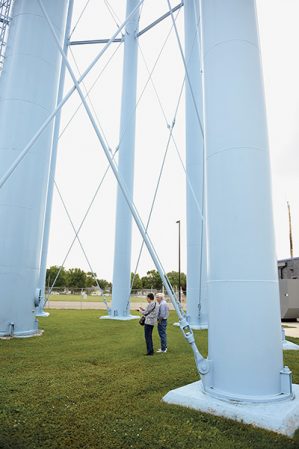 Sue and Joe Davison stand underneath the Bel-Air Water Tower after taking a picture Friday morning. Austin Utilities gave tours of the facility as part of the annual Water Festival. Eric Johnson/photodesk@austindailyherald.com

Well Station No. 9 was originally built in 1954, with its well reaching depths of 1,010 feet below the ground into the Jordan Aquifer. The average pumping rate for this well is 1,500 gallons of water per minute. The station was rehabilitated in 2016-2017 in two phases that cost $890,000. The project encompassed a building replacement and design to comply with the Minnesota Department of Health requirements, vertical turbine pump and motor replacement, new metering, piping and chemical injection system. There was a complete electrical system upgrade and standby generator for emergency power.

“We’re hoping to teach people where their water comes from,” said Todd Jorgenson, gas and water operations manager for Austin Utilities. “We want to let our customers know how they get their water, and to make sure that they know their water is safe to drink and use.”

The Bel-Air Water Tower was constructed in 1955 by the Chicago Bridge & Iron Co. for $178,987. The tank’s diameter is 78 feet, bottom of the tank’s depth is 140 feet and the top of the tank is 190 feet. The tower was refurbished in 2010 for $1,000,000. The exterior and interior was sand-blasted to metal and recoated, while modifications were made to meet current safety requirements. A spiral staircase was removed and a new vertical ladder with safety climbing device was installed.

Many communities depend on rivers or lakes as well as a treatment center in order to get their water, depending on the water quality. Austin, on the other hand, has multiple aquifers that draw water for the community.

“Austin is very fortunate to have this source of water,” Jorgenson said. “We have a very good supply of aquifers. Austin is very lucky.” 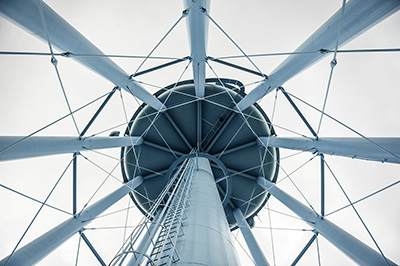 A view from underneath the Bel-Air Water Tower. Eric Johnson/photodesk@austindailyherald.com

There aren’t too many concerns of water levels dropping too low. Austin Utilities plans to continue working with the Minnesota Department of Natural Resources to track water levels as well as monitor the type of activities taking place near the community’s aquifers so that there’s no bacteria contamination or other risks that may diminish water quality.

Jenny Loucks, operations coordinator at Austin Utilities, hoped that the guests would have a deeper understanding and appreciation for having clean water.

“We strive to get the cleanest water for all our customers that is safe to drink,” she said. “We hope that they get to see how things work around here.”

Anthony Wayne Ledoux, 36, of Austin was sentenced to 10 years of probation for felony second-degree drugs-sale of 10 grams... read more